Pulitzer Prize-winning authors Toni Morrison and Alice Walker and internationally renowned author and humanitarian Maya Angelou share a common bond—their books have been banned, challenged or rejected in public schools and libraries across the United States. 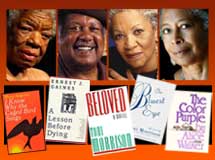 “Black and Banned: A Community Read-Out” will feature the work of contemporary and historical African-American authors whose works have been censored. The event will be held Tuesday, Oct. 2, from 3-6 p.m. in the Beauchamp Branch of the Onondaga County Public Library, 2111 S. Salina St., Syracuse, and is free and open to the public.

“Black and Banned” commemorates the American Library Association’s (ALA) “Banned Books Week 2012: Celebrating the 30th Anniversary of the Freedom To Read” (Sept. 30-Oct. 6). The Black Syracuse Project, housed in Department of African American Studies in Syracuse University’s College of Arts and Sciences, is sponsoring the event. F.O.R.C.E., a Syracuse service coalition, is co-sponsor.

Participants who are interested in reading out loud a short passage from a collection of more than 50 items selected for the event may register at the Beauchamp Library, or by calling 443-4399 or emailing Joan Bryant, coordinator of the Black Syracuse Project and associate professor of African American Studies.

Works by African American authors stand alongside hundreds of books banned or challenged each year across the country.  The ALA, which condemns censorship and works to ensure free access to information, has been compiling lists of challenged books for more than 30 years.

“Maya Angelou was commissioned to compose and read a poem in honor of President Bill Clinton’s 1993 inauguration, yet her 1969 autobiography, ‘I Know Why the Caged Bird Sings,’ was challenged 39 times in 20 states between 1983 and 2009,” Bryant says. “The Read-Out is an opportunity to celebrate the freedom to read autobiographies, histories, novels, interviews, political arguments, poetry, newspapers and religious texts that have shaped African American history and culture and informed the history of reading across the globe.”