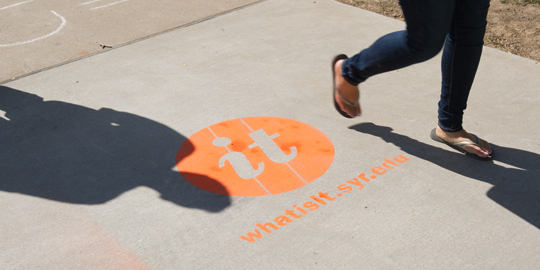 Syracuse University today announced that it has surpassed its goal for the most ambitious fundraising effort in the institution’s history.

With more than three months remaining until its conclusion on Dec. 31, 2012, The Campaign for Syracuse University has surpassed its goal of $1 billion. Through the generosity of more than 60,000 individual donors, including trustees, alumni, faculty, staff, students, parents, and supporters, the Campaign has raised a total of $1,008,612,731 as of Aug. 31.

The milestone announcement was marked today with a celebration bringing together the campus community. The event was led by members of the University’s Student Philanthropy Council.

“This is a historic moment for Syracuse University,” says SU Chancellor and President Nancy Cantor. “The Campaign for Syracuse University has galvanized the SU family as never before, creating incredibly expansive new opportunities for our students and faculty and amplifying their impact on the world in myriad ways. Together, we truly have defined Scholarship in Action. Every member of the SU community should proudly celebrate our collective accomplishment in pushing the envelope of academic innovation that makes a difference in the world.”

The Campaign’s $1 billion goal was set by the Board of Trustees and Chancellor Cantor in 2005, and is nearly triple that of any previous fundraising goal in the University’s history. A record 191 gifts have been made at the $1 million level or more, including 30 gifts of $5 million or more, led by the nearly $33 million commitment from the Newhouse family. Overall, the amount raised by the current campaign is nearly double the funds raised in the two prior campaigns combined. Key to this success: the SU Board of Trustees, whose commitments account for more than $275 million, or 27 percent of the Campaign’s current total. Trustee giving in The Campaign for Syracuse University exceeds the aggregate total of giving from Trustees over the history of the University.

“From the start of the Campaign, SU’s Trustees continually have pushed up the high water mark of their engagement,” says Dick Thompson, chairman of the SU Board of Trustees.  “Trustees across the country and around the world really have stepped up not only financially, but by enthusiastically leveraging their professional networks and bringing their best ideas to the table to build programs and infrastructure to support our students and faculty.”

The Campaign for Syracuse University is co-chaired by Trustees Melanie Gray L’81, Deryck Palmer ’78 and Howie Phanstiel ’70, G’71, and was publicly launched in November 2007, a time when other universities found their fundraising efforts postponed or hampered by the global economic recession. Despite this unfavorable climate, SU thrived, building an unprecedented national and global volunteer network ushering in a new philanthropic era for the University.

Emblematic of this: Syracuse Responds, an intensive, 60-day fundraising effort in 2008 that supported more than 400 students whose families had fallen on tough economic times and who were at risk of not returning to the University in Spring 2009. Support from the Campaign also allowed the University to continue hiring hundreds of new faculty during the economic recession, a time when many other institutions limited or halted hiring of new faculty.

“Through these past years, I have seen hundreds of alumni and friends volunteer their time and band together, intent on spreading their SU pride to others,” Palmer says. “It’s hard to express the level of passion, momentum and positive force that lives on this campus and beyond its borders. It is this dedication and generosity of thousands to this campaign that will form the foundation for our future.”

The success of the Campaign is testament to the University’s vision of Scholarship in Action, with donors pledging to support students in need, faculty excellence and innovative programs that make a meaningful difference in the world. The amount raised in each of the impact areas includes:

• $177 million to significantly increase the number of scholarships and fellowships to attract students of merit who demonstrate financial need, with more than 350 new scholarships established, including the Louise and Howard Phanstiel Scholars and the Frederic N. Schwartz Scholarship Fund;

• $150 million to endow deanships, chairs and professorships, and to attract and retain world-class scholars, more than doubling the number of endowed professorships from 48 to 99, including the Marjorie Cantor Endowed Professorship in Aging, the Chapple Family Professor of Citizenship and Democracy, the Peter Horvitz Chair in Journalism Innovation, the Phanstiel Chair in Strategic Management and Leadership and the Paul Volcker Chair in Behavioral Economics;

• $400 million to advance interdisciplinary teaching, research and community engagement initiatives such as the JPMorgan Chase Global Enterprise Technology Partnership, the David B. Falk College of Sport and Human Dynamics, the Lerner Center for Public Health and Promotion and the Martin J. Whitman School of Management;

• $160 million to enhance teaching and research facilities and provide state-of-the-art technology on campus, such as the new home of the College of Law Dineen Hall, currently under construction on campus, the Life Science Complex and Newhouse III;

• $93 million for the Fund for Syracuse, including gifts to Deans’ Funds in each of the schools and colleges; and

Of the Campaign’s total, more than $280 million has been designated for endowed accounts.

Don Mitchell, Distinguished Professor of Geography in the Maxwell School and faculty representative to the SU Board of Trustees, notes how important the Campaign for Syracuse University has been for the academic work of the University. “With a marked increase in the number of endowed chairs and professors and with the increased support of research, laboratory equipment and student fellowships, our students have the chance to learn and gain valuable experience in the classrooms on campus, in the city of Syracuse and around the world,” Mitchell says. “Funds raised through the campaign have provided us with additional opportunities to educate students ‘for the world, in the world’.”

Tom Walsh, SU executive vice president for advancement and external affairs, credits the Campaign’s success to the SU community. “The defining characteristic of this campaign has been the unprecedented degree to which members of the SU family have stepped forward to assume leadership roles as stewards of the University. Our success in terms of dollars is obvious, but the real story has been the historic commitment of time and talent of SU alumni and friends to really engage as full partners in shaping the University’s goals and aspirations, in addition to assuring that we will have the resources to achieve them. Equally remarkable is that this unfathomable generosity in every dimension came during a time when our nation and our world have faced some of the greatest economic challenges in nearly a century.”

The University will mark the success of the Campaign in November with a celebration of volunteerism and philanthropy, starting with a gathering of leadership volunteers involved in the Campaign since its inception and concluding with Orange Central, the University’s homecoming reunion the following weekend.

“While the unprecedented success of the Campaign is something we’ll celebrate for months to come,” Walsh says, “we still have important work to do. Private giving in higher education is more important than ever, and we will continue to pursue all sources of potential funding to continue to bring the best faculty, the best students and the best programs to Syracuse.”

To give to The Campaign for Syracuse University, visit campaign.syr.edu. For an interactive map showing the impact of campaign giving, visit whatisit.syr.edu.