People with disabilities remain largely sidelined in American politics, according to a new study published in Social Science Quarterly. The research article, “Sidelined or Mainstreamed? Political Participation and Attitudes of People with Disabilities in the United States,” is authored by Lisa Schur, Rutgers University associate professor, and Meera Adya, Burton Blatt Institute at Syracuse University director of research. 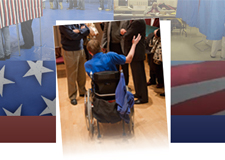 According to the study, people with disabilities have a lower turnout to the polls, with an overall gap of 11 percent in 2008. Access barriers at voting sites, reduced mobility and transportation difficulties are associated with lower turnout, even with the availability of absentee ballots.

The study authors note that the size of the disability population means it is an important voting bloc and potential swing group, especially considering the research did not find many significant differences in party affiliation or views between people with and without disabilities.

The study is based on data from the 2008 and 2010 Current Population Surveys, the 2006 General Social Survey and the 2007 Maxwell Poll on Citizenship and Inequality. The researchers will conduct a national survey of people with and without disabilities following November’s election, focused on accessibility and measuring other drivers of turnout.

Other research findings:
• In 2008, Democrats had a better effort than Republicans around mobilizing people with disabilities. As of November 2011, there were two official Democratic sites on disability and no Republican ones.

• Although political attitudes and views of people with disabilities are not significantly different from those of people without disabilities, there are differences on several key issues, such as employment and health care, which could become important drivers of mobilization this year.