Two disability advocates elected to BBI Board of Advisors

The Burton Blatt Institute (BBI) has announced the addition of Janice Schacter Lintz and Michael L. Tumen to its Board of Advisors. Schacter Lintz and Tumen each have a personal connection to BBI’s mission of advancing the civic, economic and social participation of people with disabilities. 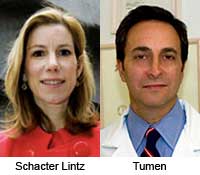 After her daughter was diagnosed with hearing loss, Schacter Lintz learned that cultural venues could provide better hearing access with relatively cheap technology such as the induction loop, a coil placed around a room that wirelessly transmits amplified sound to a hearing aid. She is founder of the Hearing Access Program (HAP), the only organization dedicated to helping the world’s corporations, cultural and entertainment institutions, government agencies and mass transit organizations improve their accessibility for people with hearing loss.

HAP has established or enhanced hearing access programs at more than 60 organizations, including the Metropolitan Museum of Art, the Holocaust Museum, Yankee Stadium and the National Football League. Schacter Lintz helped the New York City Transit recommend that induction loops be included in all subway information booths/call boxes. She also worked with the NYC Taxi and Limousine Commission to implement this same technology in all taxis on a voluntary basis. Schacter Lintz not only advocates for induction loops but for effective access for the full spectrum of hearing loss, including captioning, FM systems and American Sign Language.

Tumen honors his son Zachary’s life by participating in the vision of BBI. Zachary, who had severe disabilities, passed away in 2010 at the age of 21. He and his family are passionate about improving the lives of individuals with disabilities and the families who provide support and loving care for them. He has a daughter who is an undergraduate at SU and a son who is a first-year law student at SU College of Law. Tumen is director of foot surgery at St. Joseph Hospital in Bethpage, N.Y.