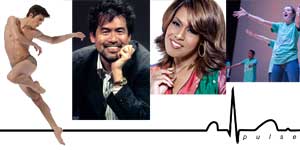 Pulse, presented by SU’s Division of Student Affairs, provides SU undergraduates and, in turn, the Central New York community, with out-of-classroom opportunities to attend and participate in programs, performances, exhibitions and events in the performing and visual arts.

“The Pulse program provides our students with a rich and meaningful experiential learning opportunity, as well as exposes our students to a diversity of valuable artistic expressions,” says Thomas V. Wolfe, SU senior vice president and dean of student affairs. “Pulse events also provide another avenue for us to open our campus to the community and have a shared experience.”

“Pulse offers us the opportunity to develop professional relationships, connect with the community, and experience quality performances for audiences to buzz about,” says Cole M. Tucker, senior mechanical engineering major. “The program is an invaluable opportunity for all students involved.”

River North Dance Chicago, Oct. 18 at 8 p.m., Goldstein Auditorium
Tickets are $5 for students with SU I.D.; $16 faculty/staff/alumni/Pulse Partners; $20 general. Parking available in Booth and University Avenue garages for $4.
River North Dance Chicago (RNDC) is dedicated to the creative advancement, presentation and preservation of jazz-based contemporary dance regionally, nationally and internationally. Celebrated for creating vital connections between dancer and audience, as well as presenting gutsy and entertaining repertoire, RNDC presents dynamic works that combine athletic prowess and artistic perspective with bold, theatrical flair. Founded in 1989, RNDC has since grown to become an internationally acclaimed company that embodies a true flavor of “Americana” in its versatile repertoire. Under the artistic direction of Frank Chaves, RNDC demonstrates depth and sophistication with a commitment to creating an accessible, enriching experience for audiences. Chaves aims for audiences to feel the complete spectrum of human emotions in a single evening, and leaves them feeling joyful and exhilarated at the end of each program. The company continues to make a name for itself on the world stage. RNDC participated in the IV International Ballet Festival in Cali, Columbia, in 2010, the Busan International Dance Festival in Korea in 2011, and toured Germany and Switzerland on an 11-city tour, as well as an 18-city tour throughout Russia in 2012. The company has been the subject of three documentaries produced by HMS Media for WTTW Chicago, each garnering an Emmy Award, among numerous additional nominations.

David Henry Hwang, in cooperation with the University Lectures Series, March 5, 2013 at 7:30 p.m., Hendricks Chapel
Free, non-ticketed event. Parking available in the Irving Avenue garage for $4.
Throughout his career, playwright David Henry Hwang has explored the complexities of forging Eastern and Western cultures in a contemporary America, including the portrayal of diversity and identity in theater, film and literature. He is best known as the author of “M. Butterfly,” which ran for two years on Broadway, won the 1988 Tony, Drama Desk, John Gassner and Outer Critics Circle awards, and was also a finalist for the 1989 Pulitzer Prize. He also authored the award-winning plays “Golden Child,” “Yellow Face” and “Chinglish,” as well as several books for award-winning musicals. According to Opera News, Hwang is America’s most-produced living opera librettist. He is the executive producer of the feature film “White Frog,” which is currently in production. Hwang has been awarded numerous grants, including fellowships from the National Endowment for the Arts, the Guggenheim and Rockefeller foundations, the New York Foundation for the Arts and the PEW Charitable Trust. From 1994-2001, Hwang served by appointment of President Clinton on the President’s Committee on the Arts and the Humanities. He has also been honored with the 2012 William Inge Distinguished Achievement in the American Theatre Award. This lecture is sponsored in cooperation with Pulse, the University Lectures Series, the LGBT Resource Center, the College of Visual and Performing Arts and the Humanities Center.

Jennifer Holliday, March 21, 2013 at 8 p.m., Goldstein Auditorium
Tickets are $5 for students with SU I.D.; $16 faculty/staff/alumni/Pulse Partners; $20 general. Parking available in Booth and University Avenue garages for $4.
Thirty years ago, Holliday’s show-stopping, heart-wrenching performance of the torch ballad, “And I’m Telling You, I’m Not Going,” in the smash hit Broadway musical “Dreamgirls” made her a household name and introduced her big, soulful voice to the world. Her portrayal of Effie “Melody” White, a role she co-created, garnered her a Tony Award for Best Actress in a Musical and her first Grammy Award for Best R&B Female Vocalist. Born and raised in Houston, Holliday went straight from the Pleasant Grove Baptist Church Choir to the Broadway stage. Holliday toured with the show “Your Arms Are Too Short To Box With God” for five months and then made her Broadway debut with the show. While on Broadway, Holliday’s talent was noticed by the renowned Broadway director and choreographer Michael Bennett, the creator of “A Chorus Line.” He invited her to participate in an untitled project that he was producing, which turned out be “Dreamgirls.” The show opened on Broadway in 1981 and ran for five years, winning universal acclaim. Holliday’s other theater credits include “Sing Mahalia Sing: The Mahalia Jackson Story,” “Downhearted Blues: The Bessie Smith Story,” “Harlem Suite” (with Aretha Franklin), “Chicago,” “Grease” and “Black Nativity.” Holliday also reprised her role as Effie to sold-out crowds in 2007. She released five albums beginning in 1983. Her second album, “Say You Love Me,” won her a second Grammy for her rendition of Duke Ellington’s classic, “Come Sunday.” She later paved a new path in her career as an actress. TV producer David E. Kelley cast her for a character he wrote into the “Ally McBeal” series for five years. She also appeared on other TV series through the years. Holliday has been finishing work on two CD projects—her first full-length CDs in 17 years. One album is of pop standards, entitled “Love is on the Way,” that will feature evergreen songs, such as “At Last.” She also just released “Goodness and Mercy,” a set of sacred songs and sermons with the Rev. Raphael G. Warnock, the pastor of Ebenezer Baptist Church, the spiritual home of Martin Luther King Jr. Holliday continues to perform all over the world with leading symphonies. She has performed for both Democratic and Republican U.S. Presidents, and in 2000, she received an honorary doctorate of music from the Berklee College of Music for her work on behalf of mental health awareness, depression and suicide prevention.

First Year Players Spring Musical, April 4-6, 2013 at 8 p.m., Goldstein Auditorium
Tickets $4 for students with SU I.D.; $7 general. Parking available in Booth and University Avenue garages for $4.
In 1992, First Year Players (FYP) was formed at SU under the leadership of Ed Golden, who was the vice president of student affairs. Before arriving at Syracuse, Golden founded FYP at the University of Virginia in 1981. Golden encouraged non-drama major students to create their own spotlight by forming the student-run organization that is now First Year Players. As the premiere student-run musical theater organization at the University, FYP’s purpose revolves around giving non-drama major first-year and transfer students the opportunity to perform in an annual spring musical. Along with this, it gives production experience to undergraduate members, many of who were in previous FYP productions. FYP exists to create an environment that fosters personal and professional growth of Syracuse University students. FYP offers a whole package to its members, including workshops, community service events, performance opportunities, production experience and networking with other student organizations. Past shows include: “The Drowsy Chaperone,” “The 25th Annual Putnam County Spelling Bee,” “Dirty Rotten Scoundrels,” “Urinetown,” “Fame,” “West Side Story,” “Anything Goes,” “Follies” and “How to Succeed in Business Without Really Trying.”

Become a fan on Facebook at Pulse Performing Arts Series at Syracuse University.