Much like the fabled tortoise and the hare, the competition between native and invasive plants growing in deciduous forests in the Eastern United States is all about how the plants cross the finish line in autumn. 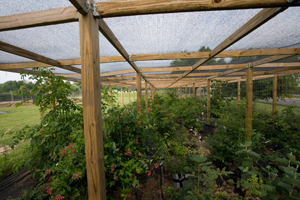 A new study by a Syracuse University biologist has found that the leaves of invasive plants continue to function in the fall, long after their native cousins have hunkered down for the winter. The findings are counter to conventional wisdom, which held that plants living under the forest leafy canopy obtain most of their food via photosynthesis in the spring and early summer before the canopy blocks the amount of sunlight getting to the shrubs.

The study, “Extended leaf phenology and the autumn niche in deciduous forest invasions,” will be published online April 25 in Nature, the premier international journal of science, and is forthcoming in print.

“It’s a classic case of scientific serendipity,” says study author Jason Fridley, assistant professor of biology in SU’s College of Arts and Sciences. “We set up the experiment to quantify the amount of photosynthesis happening in the spring when both groups of plants were thought to be most active. But we found it was all about the finish. This was totally off of everybody’s radar.”

Many of the plants growing naturally under the forest canopy in the eastern United States, including New York, Pennsylvania and New England, are closely related to those that have been imported for more than 100 years, primarily from Europe, China and Japan, for cultivation in home gardens. The imported plants have invaded the surrounding forests and thrived. Scientific research is focused on uncovering strategies the invaders use that make them so successful.

Fridley set up an experimental garden on SU’s South Campus that includes groups of native plants and their non-native cousins, such as Japanese honeysuckle (invader) and Canada honeysuckle (native), burning bush (invader) and bursting heart (native), and European buckthorn (invader) and Carolina buckthorn (native). His research team monitored the plants for three years, recording when the leaves burst, turned brown and dropped. They also used devices to measure leaf chlorophyll and photosynthesis throughout the leaf growing and dying seasons.

Most significantly, the researchers found that the invaders retained their leaves and continued to photosynthesize almost four weeks longer into the fall than their native cousins, which begin shutting down between late August and mid-September. “The extended leaf activity we found in the invaders is rarely seen in native species that inhabit deciduous forests,” Fridley says. “However, the data don’t tell us whether this is the primary strategy invasive plants use to compete with native species.”

The plants in the study have had separate evolutionary histories since at least the Pleistocene Age (11,400 to 2 million years ago). Climate conditions over the North American continent were colder with more ice coverage than Asia, Fridley says. Native species responded to the shorter growing seasons by pulling nitrogen from their leaves to store in the stems, causing the leaves to turn brown and fall off. “Invaders don’t appear to store as much nitrogen,” Fridley says. “Their leaves fall off with a higher nitrogen content. It may be that the invasive species are better suited a warming climate.”

Which begs the question of how the invaders gain back in the spring the nitrogen that falls to the forest floor in the fall. “One hypothesis,” Fridley says, “is that invaders evolved by depending on earthworms to decompose the leaves, making nitrogen available in the spring for the plants.” Native plants did not evolve with earthworms because native earthworms did not survive glaciation. “Eurasian earthworms invaded North America at some point in the past,” Fridley says. “It’s conceivable that having co-evolved with earthworms, the invaders would devise a nutrient-use strategy that was not dependent on re-absorbing the nutrients from the leaves.”

The larger question for scientists is, how does an increase in the amount of nutrient-rich leaf litter affect the overall forest-floor ecosystem? “It’s possible the extended growing season of non-native shrubs in deciduous forests may be a major driver of human-induced ecosystem change in eastern North America that may rival climate change in its impact on forest processes,” Fridley says.