Symphony Syracuse will present an afternoon of favorites by Wolfgang Amadeus Mozart on Sunday, April 29, at Inspiration Hall (formerly St. Peter’s Church), 709 James St., Syracuse. The 2:30 p.m. concert will feature violinist Rimma Bergeron-Langlois, former associate concertmaster of the Syracuse Symphony Orchestra (SSO) and current concertmaster of the Orlando Philharmonic. She will perform the Violin Concert No. 4 in D major. Daniel Hege conducts the program, which also includes the popular “Eine Kleine Nachtmusik” and Symphony No. 40 in G minor.

Tickets are $20 general admission, $17 for seniors and $10 for students with IDs. Tickets are available from the Syracuse Opera Box Office, 315-476-7372 or http://www.syracuseopera.com. 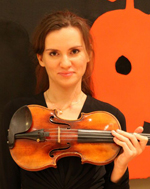 Bergeron-Langlois is a native of Kharkov, Ukraine, and was for several seasons a member of the SSO, where she ascended to the position of associate concertmaster. Before arriving in Syracuse, Bergeron-Langlois served as concertmaster of the UBS Verbier Festival Orchestra. She worked with James Levine, Valery Gergiev, Yuri Temirkanov, Zubin Mehta, Charles Dutoit, Christoph vonDohnányi, Mstislav Rostropovich, Esa-Pekka Salonen, Michael Tilson Thomas and others. In addition, she has held the title of concertmaster of the Verbier Festival Chamber Orchestra for Maxim Vengerov’s recent EMI Classics Mozart recording. She worked with Charles Dutoit at the Miyazaki Festival as well as with Seiji Ozawa at the Saito Kinen Festival in Japan.

Hege is widely recognized as one of America’s finest young conductors, earning critical acclaim for his fresh interpretations of the standard repertoire and for his commitment to creative programming. He served for 11 seasons as the music director of the SSO and in June 2009 was appointed music director of the Wichita Symphony, beginning his tenure with that orchestra in September 2010. In 2009, he was appointed the Stevenson Professor of Practice at the Rose, Jules R. and Stanford S. Setnor School of Music at Syracuse University’s College of Visual and Performing Arts.