Students of all ages could improve their test scores if the category of information changed abruptly midway through the test, according to a new study on memory by researchers from Syracuse University, the University of South Florida and Indiana University. The study was recently published in Psychological Science, a journal of the Association for Psychological Science. 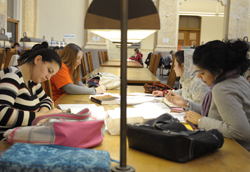 The study was conducted by Amy Criss, assistant professor of psychology in SU’s College of Arts and Sciences; her research associate Kenneth Malmberg of the University of South Florida, the corresponding author of the study; and colleagues from Indiana University. The National Science Foundation (NSF) and the Air Force Office of Scientific Research funded the study.

The researchers looked at the question of “output interference” and how it can be minimized when people are trying to recall information or answer a series of questions over a relatively long period of time, such as in standardized testing. Output interference is a phenomenon that causes a decrease in memory accuracy as the number of questions in a particular subject area increases.

“The simple act of testing harms memory,” Criss says. “Previous studies have shown that people are more accurate in their responses to questions at the beginning of a test than they are at the end of a test. This is called output interference. Our study demonstrates how to minimize the effects of output interference.”

The researchers found that simply changing the subject matter of the questions increases accuracy on longer tests. In the study, test subjects were asked to memorize word sets from different categories, such as animal and geographic terms, or countries and professions. The testers were then split into three groups, each of which responded to a series of 150 questions. The tests included 75 terms from each word set.

The second group out performed its counterparts on the test. “While accuracy fell off as the test subjects neared the end of the first category of terms, the accuracy rebounded when the questions switched to the second category of terms,” Criss says. “The study demonstrates that memory improves when categories of information people are asked to remember change.”

The results have implications for the way in which standardized and comprehensive tests are created, Criss says. “You don’t want to place a lot of the same information into one section of the test. Accuracy will increase by changing the subject matter of the questions.”

The results also have implications for student study habits. “While it’s natural for students to complete one subject before moving on to the next, if you look at the data, students may have better results if they work on one subject for a little while, move to something completely different and then go back to the first subject,” Criss says.

Link to the study, “Overcoming the Negative Consequences of Interference from Recognition Memory Testing,” in Psychological Science.