The red carpet will go down on Montgomery Street on Wednesday, May 9, as Syracuse prepares for the world premiere of “Crooked Arrows,” the first mainstream film featuring the sport of lacrosse. 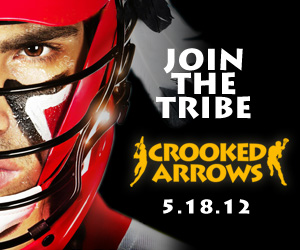 Neal Powless, a former All American lacrosse player, Onondaga Nation citizen and staff member in the Office of Multicultural Affairs at Syracuse University, is a co-producer of the film. “This is an important project and moment for the Onondaga Nation and all players around the world of lacrosse. This film truly depicts the traditions of our game of lacrosse and the challenges that many native people experience in daily life,” Powless says.

“Crooked Arrows” tells the story of a Native American high school team on their unlikely journey to the state lacrosse championship game against their prep school rivals. Along the way, the team rediscovers its connection to the spiritual tradition of the ancient sport. “Crooked Arrows” offers moviegoers a classic underdog sports story, but with a new twist. “’Crooked Arrows’ breaks new ground in the sports movie genre,” says producer J. Todd Harris. Producing partner Mitchell Peck adds, “This is the first modern-day, family-friendly Native American movie.”

“Crooked Arrows” will be released through Peck Entertainment and Branded Pictures Entertainment in consultation with Freestyle Releasing and Russell Schwartz’s Pandemic Marketing.

The film opens in select cities on May 18 and nationally on June 1, and stars Brandon Routh (“Superman Returns”) and Gil Birmingham (“Twilight”). It was directed by Steve Rash (“American Pie Presents Band Camp”) and produced by Harris (“The Kids Are All Right”), Mitchell Peck (“Priest”) and Adam Leff (“The Last Action Hero”). In addition, the movie features a team of Iroquois players, as well as top lacrosse players from around the country, such as Paul Rabil, Zack Greer and Brodie Merrill, who make cameo appearances.

Syracuse was chosen as the location for the world premiere of “Crooked Arrows” because of its connection to the history of the Onondaga Nation, the film’s major sponsor. Onondaga remains the meeting place for the Grand Council of Chiefs, the traditional ruling body for the Haudenosaunee, an alliance of native nations united for hundreds of years by traditions, beliefs, cultures and values. The Onondaga Nation is a member of the Haudenosaunee or “People of the Longhouse.”

Tickets for the World Premier event are available through Ticketmaster and the OnCenter Box Office. The box office opens at 6:30 p.m.; the film premiers at 8 p.m. Cast members, Onondaga Nation leaders and a notable group of dignitaries are expected to attend this special world premier event that will also be simulcast to locations across the United States.

For more information visit www.crookedarrows.com, or www.facebook.com/crookedarrows; or contact Kristi Arrowood, premier producing coordinator at arrowoodk@marshall.edu; Powless at njpowles@syr.edu or www.syrfilm.com. The Syracuse International Film Festival is assisting with local event planning as part of its mission of bringing film programming to the community.