Syracuse University will recognize three individuals and an organization with the Orange Circle Award, honoring members of the SU community who have done extraordinary things in the service of others.

The awards will be given at an invitation-only luncheon at the Sheraton Syracuse University Hotel and Conference Center on Tuesday, April 10, during SU’s Philanthropy Week. 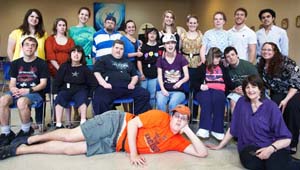 All Star C.A.S.T. is a program for Syracuse University drama students and people with disabilities from the community, all of whom have a love of acting and the desire to come together to create theater.

The mission of All Star C.A.S.T. is to provide a safe, nonjudgmental space for community actors and drama students to explore their creativity and to renew their sense of play and joy in acting outside of the competitive arena. The program also encourages communication, group awareness, sensitivity, sharing, confidence and personal affirmation.

Originally called the Young Actors Workshop, the group was formed in 1991. Today, All Star C.A.S.T. includes four groups: actors aged 8-12 years, actors aged 18-30 years and two senior groups. The groups meet for workshops once a week to explore theater games, and ultimately move toward the creation of a script, rehearsals and a production at the end of the semester.

SU Drama students serve as facilitators, designing the program for the semester, guiding the exercises and producing and performing in the show with the community actors.

The workshops have a faculty adviser who meets with facilitators each week and oversees the classes and productions. Drama faculty members also offer important input to guide the students in exercises, and in the first three weeks of the semester, students participate in workshops to explore different approaches and techniques. 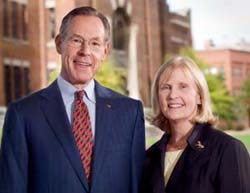 Her more than 90 clients in Europe and the United States included businesses, nonprofits, school systems, colleges, professional organizations, military groups and civic organizations. As part of her consulting capacity, Mower was certified by the International Association for Public Participation as a specialist in citizen-led community revitalization. She retains membership in the Alliance for Regional Stewardship and the American Psychological Association.

In addition to her consulting work, Mower has been an adjunct faculty member in SU’s Whitman School of Management and Maxwell School, and has been an instructor in executive development programs, including the Bantle Institute and Army Comptrollership Program. She holds an undergraduate degree in zoology and three advanced degrees in counseling and guidance and social psychology, all from SU.

An SU trustee, Mower serves on the board’s academic affairs and student affairs committees. She also serves on the Library Advisory Board.

Mower is known in Central New York for her civic activities and accomplishments. She has served on more than two dozen local and state nonprofit boards, including Syracuse Stage, WCNY, the Urban League, Children’s Consortium and Vera House, and served on the Manlius Pebble Hill School Board for 12 years (six years as chair). She’s held numerous leadership roles in other organizations and has chaired or assisted several fundraising campaigns.

Mower is also founder or co-founder of Leadership Greater Syracuse, Professional Consultants Association of Central New York, Success by Six, the Dialogue Circles on Racism and Racial Healing, FOCUS Greater Syracuse, Vera House Foundation, and the Women’s Fund of Central New York. She currently serves on the boards of FOCUS Greater Syracuse, Parks and Trails New York, and Syracuse 20/20, and is vice chair of the Syracuse Say Yes to Education Leadership Council. In her winter home community of Sarasota, Fla., she serves on the Advisory Council of the University of South Florida’s Life-Long Learning Academy.

Mower was named the Syracuse Post-Standard Woman of Achievement in 1989, Fund Raiser of the Year in 1993 and a member of Leadership America in 1995. She is the recipient of leadership awards from Girls Inc., Interfaith Works, Central New York Girl Scouts, Vera House, the Jim and Juli Boeheim Foundation and the Salvation Army. Most recently, she received the 2012 Wisdom Keeper Award from FOCUS GREATER SYRACUSE.

Eric Mower currently serves as a vice chair of the Business Council of New York State; he is also a director of the American Association of Advertising Agencies (4A’s), chairs the 4A’s Government Relations Committee; and is chair of the National Advertising Review Council (NARC), which oversees the advertising industry’s self-regulatory structure. Previous service to the 4A’s includes chair of the New York State Council, chair of the Eastern Region Board of Governors and secretary-treasurer of the trade association. He served seven years as president of the Paris-based International Network of Advertising Agencies (IN) and was the founding chair of the federal Erie Canalway National Heritage Corridor Commission. He was also founding chair of the Syracuse Neighborhood Initiative.

Mower holds an undergraduate degree in English literature from SU’s College of Arts and Sciences and a master’s degree in public relations from the Newhouse School.  His firm has sponsored scholarship aid and annual internships for students enrolled in the Newhouse School and the College of Visual and Performing Arts. The Mower family helped fund a Humanities Fine Arts Visiting Professorship and has made gift commitments to the Maxwell School campaign, the Goldstein Alumni and Faculty Center and Newhouse 3. The Newhouse School has honored Eric Mower by designating its annual advertising guest speaker series the Eric Mower Advertising Forum.

An award-winning veteran broadcast journalist, Robinson is president and chief executive officer of A.R.C. Media, LLC, a full-service media company. She is currently host and executive producer of the award-winning news and public affairs talk show “IN CONTACT.” The first of its kind, the program is produced by the Atlanta Association of Black Journalists, and airs on PBS station WPBA. “IN CONTACT” is Atlanta’s only news and public affairs talk show covering topics from an African American perspective.

Prior to work in Atlanta, Robinson spent 10 years at WTTG, FOX Television’s award-winning newscast in Washington, D.C., as a reporter, talk show host and primary news anchor. There, Robinson was instrumental in covering local and national news stories and major sporting events, earning several Outstanding Awards of Excellence for her reporting and anchoring. From 1978-1983, Robinson worked as an editor and general assignment reporter for Atlanta’s CBS affiliate, where she played a key role in coverage of the city’s missing and murdered children.

A television and radio graduate of SU’s Newhouse School , Robinson was awarded the Chancellor’s Citation for Distinguished Achievement in Journalism. She established the Angela Y. Robinson Endowed Student Scholarship Fund and is a member of the Newhouse Advisory Board. Robinson is also a Telly Award winner, honoring excellence for her work in a video production with Syracuse University.

Robinson has received multiple Southern Regional Emmy Awards for her work as news anchor, talk show host, performer, news writer, specialty reporter, feature reporter and sports reporter. She has earned awards from the National Association of Black Journalists (NABJ) and the Atlanta Association of Black Journalists (AABJ) for news and sports reporting, and for her work with “IN CONTACT.” In 2001, NABJ inducted Robinson into its Regional Hall of Fame, and AABJ honored her as a Pioneer Black Journalist in 2007. She received the Absolute Africa Award for her commitment and contribution to the African American community, given by Absolute Inc. and Women Looking Ahead magazine.

In 2002, she received a Biography Community Heroes Award from “Biography” and the A&E Television Network, and she was named Journalist of the Year by the Rainbow Push Coalition in 2005. The Atlanta Business League named Robinson one of Atlanta’s top 100 Black Women of Influence, and the AABJ honored her as its 2007 Pioneer Journalist. She is a 2009 Torchbearer recipient, presented by civil rights legend C.T. Vivian’s Leadership Institute, and was named a 2010 Visiting Professional Professor at Eastern Illinois University.

Among Robinson’s many professional and community memberships are NABJ, AABJ, the National Council of Negro Women, Who’s Who Among African Americans, Who’s Who in Black Atlanta, the National Academy of Television Arts and Sciences, the Atlanta Press Club and the School Council Advisory Board at Henry Grady High School, a Georgia School of Excellence.