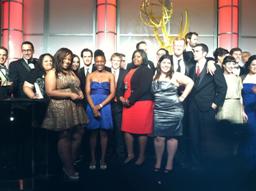 “The Complex,” a six-episode drama created by television-radio-film (TRF) students in Syracuse University’s S.I. Newhouse School of Public Communications, has been honored with an Academy of Television Arts & Sciences Foundation College Television Award for Outstanding Narrative Series. This is the second time TRF students have received the award.

“This is the ‘national championship’ of college-level television production,” says TRF chair Michael Schoonmaker. “These students not only wrote and produced a thrilling story, they also created an innovative production style employing new DSLR [digital single-lens reflex] technology along with some very gutsy camera moves. I couldn’t be more proud of them!”

The series was produced as part of the Television Production (TRF 452/652) course at Newhouse, taught by Schoonmaker. It can be viewed on YouTube.