Syracuse Stage has announced its upcoming 40th anniversary season, offering a riveting adaptation of Herman Melville’s “Moby Dick” complete with 16 authentic sea shanties; the heartwarming holiday favorite “White Christmas” with familiar tunes by Irving Berlin; and glorious storytelling and political humor in August Wilson’s “Two Trains Running.” It will also feature enchanted woods and romance in Shakespeare’s best-known comedy “A Midsummer Night’s Dream,” sharp humor from South Boston in the critically acclaimed “Good People” by David Lindsay-Abaire and an edgy adaptation of Homer’s epic “An Iliad” told by a single poet. In addition, Stage will present the world premiere of “Cry for Peace: Voices from the Congo,” by Ping Chong and Kyle Bass, for a limited engagement prior to a New York run. 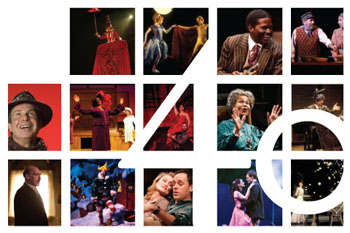 “The artistry and work of many have built this theater over the years and have made it a vital cultural center for Central New York and a nationally recognized professional theater that attracts the country’s leading actors, directors and designers. We salute them and we are proud to continue the good work they started and maintained,” says Producing Artistic Director Timothy Bond. “The plays in the 2012-2013 Season are prime examples of the kind of theater we want to share with you. They are plays that speak to us about our lives this very moment.”

All of the plays in the 2012-2013 season will be presented in the 500-seat Archbold Theatre, with the exception of “An Iliad,” which will be performed in the Storch Theatre with avenue seating (similar in setup to Stage’s 2010 production of “Lookingglass Alice”).

Six-play subscribers may renew their seats by calling the Syracuse Stage Box Office at 315-443-3275. Benefits to subscribing include a discounted ticket for each play and one free ticket; best seats (available before the general public); best discounts on additional single tickets; discounts to area restaurants; unlimited ticket exchanges; a ticket replacement guarantee; and Syracuse Stage’s insider newsletter, StageView, mailed to subscribers’ homes.

Prices for 6-Play Subscriptions range $135-$279 for adults, with variations depending on the day of the week and seating section. Discounts are available for seniors; ages 40 and under; and ages 18 and under.