Syracuse Stage’s production of Tarell Alvin McCraney’s The Brothers Size, directed by Producing Artistic Director Timothy Bond, will move to leading theaters in South Africa, made possible by support from the Robert Sterling Clark Foundation. “The Brothers Size” began rehearsing at Syracuse Stage on March 20, and will perform in Syracuse from April 18-May 12. Following the Syracuse run, the production will transfer to the Baxter Theatre Centre in Cape Town (performances starting May 19) and then The Market Theatre in Johannesburg (performances starting June 10). 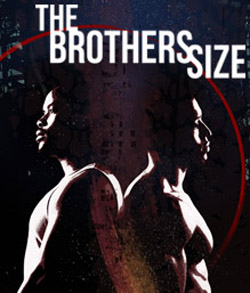 Mannie Manim, the co-founder of The Market Theatre and a leading figure in South African theater, will oversee the play’s transfer to South Africa and coordinate plans for community engagement and professional development.

“Bringing a production like ‘The Brothers Size’ from the United States to South Africa is a very unusual event,” says Manim, who has personally been involved in just two or three production transfers over the last 50 years. “This play in particular resonates with some of our great South African theater productions due to the physicality of the piece, the sparseness of the staging, the reliance on the word (and it is beautifully written), and the performances of the three actors.”

Performing in the Syracuse Stage/South Africa production are Rodrick Covington as Oshoosi, Sam Encarnacion as Elegba and Joshua Elijah Reese as Ogun.

Manim and Jeffrey Woodward, Syracuse Stage’s managing director, have collaborated several times. During his 17-year tenure at McCarter Theatre Center, Woodward oversaw a transfer of “Having Our Say” to the Market Theatre, and Manim helped coordinate a transfer of Athol Fugard’s “The Captain’s Tiger” to the McCarter in Princeton, N.J.

“With the transfer of ‘The Brothers Size’ to South Africa, Syracuse Stage hopes to establish an ongoing relationship with South African theaters so that audiences and artists in both countries will continuously benefit from the rich exchange of ideas, experiences, art forms and cultures,” says Woodward.

In addition to the performances in Johannesburg and Cape Town, the actors, Bond and Woodward will participate in a number of cultural exchange sessions with South African audiences, artists and arts administrators.

By presenting “The Brothers Size” in South Africa, Syracuse Stage also hopes to open a door to future, enduring artistic exchanges that may eventually result in bringing a South African production or South African artist to the United States.

“The Brothers Size” is an intense and intimate play, a timeless tale of filial love and responsibility put to the test, with a theatrical overlay of Yoruba mythology and West African deities (the Orishas) rendered through flights of poetry, music and dance.

Set in a poor, working-class Louisiana community, “The Brothers Size” is an intimate, powerful play that examines one’s responsibility to family. The elder brother Size, Ogun, is an auto mechanic; Oshoosi, the younger brother, is a recently released convict living with his brother. Ogun wants Oshoosi to get a job and lead a life of responsibility, but Oshoosi longs for a freer lifestyle. Into this struggle comes the charismatic Elegba, who was in prison with Oshoosi. Elegba has designs of his own for Oshoosi, designs that could prove catastrophic for the younger Size. To what lengths will one brother go to save the other from a life of incarceration? Fresh, bold and highly theatrical, “The Brothers Size” tells a poetic and unpredictable story of rich mythic quality.