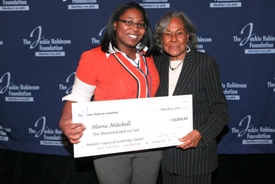 Syracuse University’s Olevia Mitchell, a junior in The College of Arts and Sciences, has received the coveted Unilever Legacy of Leadership Award at the Annual Jackie Robinson Foundation Mentoring and Leadership Conference held in New York City March 3-6.

The award was created to honor a JRF Scholar in his or her junior year who, through exemplary leadership, has made a positive impact on society at large. It is presented in the spirit of Jackie Robinson Foundation Founder Rachel Robinson who has said “no one who dares to stand up and challenge the status quo, does so alone.”

Established in 2003, this $10,000 award can be used towards tuition or a charity of choice toward furthering a community service initiative. In addition, the scholar is offered candidacy for a domestic internship at Unilever.

In 2008, Mitchell created the Neighborhood Action Council, which engages youth in her community to improve their neighborhood by promoting healthy activities as an alternative to the norm of gangs and truancy.  The economics and psychology double-major at SU also created two murals in her community, bringing empowerment and ownership to her peers through art.

“With our partners and supporters, we are delighted to recognize the extraordinary achievements of these future leaders,” said JRF President and CEO Della Britton Baeza. “Olevia is a true legacy of our iconic namesake, Jackie Robinson who challenged us all to share our talents and skills with those in need.”

The Los Angeles native plans to use her award to further the efforts of Neighborhood Action Council.