The Blue Heron Renaissance Vocal Ensemble will be the next guest in the Malmgren Concert Series at Syracuse University’s Hendricks Chapel on Tuesday, March 27. The concert begins in the chapel at 8 p.m. and is free and open to the public. Free parking will be available in the Irving Garage. 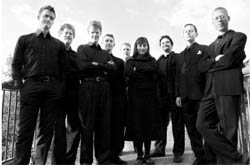 The ensemble will perform “Music for Three Sovereigns,” featuring music from the court of Maximilian I (Holy Roman Emperor from 1493-1519), his daughter, Marguerite of Austria (1480-1530) and Dido, Queen of Carthage. The program includes works by Heinrich Isaac, Josquin des Prez and Jacob Obrecht.

Boston-based Blue Heron is a professional vocal ensemble that specializes in the performance of Renaissance music. The ensemble performed the opening concert of the Boston Early Music Festival in 2009.

Last season, the ensemble performed with Piffaro in Philadelphia and at Dumbarton Oaks in Washington, D.C. Blue Heron has two CD recordings: music of Guillaume du Fay and music from the Peterhouse partbooks, featuring works by Hugh Aston, Robert Jones and John Mason.

The last concert in the 2011-12 Malmgren Concert Series will be the Hendricks Chapel Choir Spring Concert on Sunday, April 22.

For more information, call Hendricks Chapel at 443-2901 or visit http://hendricks.syr.edu.