Syracuse Student Sandbox Director John D. Liddy was honored to be nominated for a Champions of Change award from the White House, but even more affirming was what he learned about the distinctiveness of the School of Information Studies’ student entrepreneurial mentoring program during his visit. 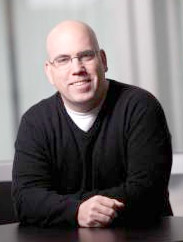 Liddy was one of 150 guests throughout the United States invited to discuss entrepreneurial mentoring with officials of the Small Business Administration and the White House Office of Public Engagement on March 7. He was a nominee for the Champions of Change mentorship award, which recognizes outstanding leaders in entrepreneurial mentoring, counseling and training in support of small business owners.

“To be there was awesome, exciting, and it was very reaffirming. I came away more pleased with what we are doing by seeing how the program stands up with everyone else’s. We’re doing things well, and what we’re doing is unique,” he says.

In conversations with Small Business Administration service providers there, Liddy says he was told there are not many actual practitioners of mentoring, as is the case with the Syracuse Student Sandbox. In addition, he says the officials told him they have formally studied various mentoring techniques as related to the federal Jumpstart program, and consider the team-based approach (used at the iSchool) as a best practice.

Liddy says he was encouraged by the gathering in terms of a federal initiative on mentorship. “One thing I saw is a government interested in what we’re doing.” The breakout sessions where SBA officials directly asked mentors how the agency could help consisted of “small sessions directly led by influential people. They asked us questions, and wanted to hear more.” In addition to the awards presentation, Liddy also took part in a breakout panel discussion focused on venture networks.

The award nomination, plus the fact that two student companies have gone to the White House for recognition in the last six months, is significant for Syracuse University and the iSchool, Liddy says. “We’re really getting on the map. We really have a lot of momentum.”

The Syracuse Student Sandbox was established in 2009 as a unique business incubator to provide student entrepreneurs with the resources to make their visions a reality. Liddy notes that last year, there were 39 groups applying for Sandbox funding, and this year, the number has grown to 129 applicants.

Six higher education institutions take part in the Sandbox. They are: SU, the SUNY College of Environmental Science and Forestry, Onondaga Community College, Le Moyne College, Morrisville State College and Cayuga Community College. The institutions are partnered with the Kauffman Foundation-funded Enitiative to provide contacts and resources to broaden the reach of entrepreneurial education and innovation in the Central New York region.