SU tech entrepreneur goes beyond ‘getting his job on the Internet’

Along the way to the traditional, buttoned-up college education he thought he would need in life, Isaac Budmen went rogue, you might say.

The third contestant in the School of Information Studies (iSchool) #140challenge, Budmen described how his co-founding of a technology company and his graduate schooling in information entrepreneurship were spurred by a shutdown of sorts. He had heard too many times already about so-called “evils of the Internet” when he was advised in a class one day that the Internet would never help him land a job. 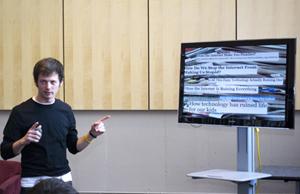 Budmen, being Budmen, couldn’t resist some pushback. So he tweeted about it under the hashtag, “#IGOTMYJOBONTHEINTERNET.”

The Twitter discussion caught on across the Syracuse University campus. Soon, it was picked up in Western New York and in Albany, and quickly went statewide. Then, “it got a lot bigger very quickly, and we were part of a nationwide discussion around the hashtag,” Budmen recalls.

The results reaffirmed his beliefs about the power of real-time communication. Next, Budmen and his tech friends created a Tweet-played social game. That effort took a similar trajectory, gaining 20,000-plus unique visits within 48 hours. It became popular around the world, with people from 77 countries participating. Aside from creative enjoyment, those experiences taught Budmen “real-time disruptive technologies put us in amazing contact with each other, allowing us to go after goals and assess goals together—that’s authentic learning,” he says. “Without it, we wouldn’t have the potential to engage with influencers, become a small part of a huge intellectual marketplace and share an experience you can’t get in the classroom. It’s like sharing your thoughts and discussions with every seat in the [SU] Dome in real time.”

Another rebuff proved just as rewarding, in the end. When Budmen tried to meet his tech idol, Foursquare founder and SU alumnus Dennis Crowley via conventional business protocol, he was discouraged from doing so by some of Crowley’s staff. Again, Budmen took matters into his own thumbs. He tweeted Crowley directly. The strategy worked. Budmen’s group met Crowley for coffee and a discussion that inspired their future course. “The biggest lesson we took from Dennis was to build. Build for yourself, build often, build, build, build,” Budmen recalls.

Today, Little Tinker Co. is building both physical hardware and code, growing a company founded on the principles of “great ideas, great people and great products.” While Budmen enjoys creating hardware, he thinks building code is just as critical to success. “Code is one of the greatest features that’s so often overlooked. Reliability, constant functionality—it is the biggest feature software can have.”

For now, Budmen is completing his undergraduate program at the Maxwell School of Citizenship and Public Affairs, taking iSchool graduate courses and is enrolled in the iSchool’s graduate Entrepreneurship in Information Technology program on a scholarship. He is enjoying a pathway that seems attuned to someone “who has loved gadgets and Tinkertoys since I was a little kid,” he says.

The future includes hopes of moving Little Tinker Co. to San Francisco’s tech hotbed someday. “I’m not saying we’ll be the next Apple or Microsoft, but we have a really big vision for bringing people technology that allows them to learn and engage in ways that they haven’t thought about. We want to revolutionize the way people think about technology,” Budmen explains. “We’ll start small and work our way up. Someday, we’ll come back and look at that silly game we made,” he adds, reminding his audience of the wise advice he took to heart: “Don’t let education get in the way of your learning.”