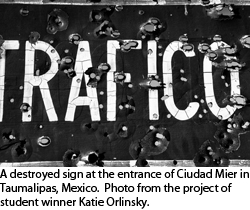 Tom Kennedy, Alexia Tsairis Endowed Chair in Documentary Photography in the S.I. Newhouse School of Public Communications, recently announced the winners in the 2012 Alexia International Photojournalism Competition, hosted by the Newhouse School. The competition is sponsored by the Alexia Foundation for World Peace and Cultural Understanding.

Photojournalist Justin Maxon won the $15,000 Alexia Foundation professional grant for a proposed project that aims to “shed light on the frightening reality of how many murders go unsolved every year in America.” His project also won the Cliff Edom “New America Award” as part of the National Press Photographer Association’s 2011 Best of Photojournalism competition. Based in San Francisco, Maxon has received numerous awards for his work, and was the second-place student winner in the 2008 Alexia Competition—making him one of only two photographers to have earned Alexia Foundation grants as a student and a professional.

Katie Orlinsky was the first-place winner in the student category for her project “Innocence Assassinated: Living in Mexico’s Drug War,” which tells “a less covered story of Mexico’s drug war: the innocent victim.” She is currently a student at the Columbia University Graduate School of Journalism and a fellow at the Toni Stabile Center for Investigative Journalism. She regularly works for The New York Times, the Wall Street Journal and various nonprofit organizations around the world.

In addition, photographer Kathryn Cook earned a Judges Special Recognition award and will receive special grant funding from Aphrodite and Peter Tsairis, co-founders of the Alexia Foundation, to complete her project “Memory of Trees,” which explores “the aftermath of the ‘denied’ 1915 Armenian Genocide in Ottoman Turkey, and the reality of living as an Armenian in Turkey today.”

Second place student winner was Oxana Onipko for her project “Russian North Caucasus, Dagestan: Violence Waits in the Shadows,” a documentary project about “the complex and violent conflicts inside Russia’s North Caucasus Republic of Dagestan, the most dangerous place in Europe.”

In addition, Awards of Excellence went to:

The competition was held at Newhouse on Feb. 25. Judges were Whitney Johnson, director of photography with The New Yorker; Kira Pollack, photo editor with Time magazine; and Maggie Steber, an independent documentary photographer.

The Alexia Foundation honors the memory of Alexia Tsairis, a victim of the 1988 terrorist bombing of Pan Am Flight 103 over Lockerbie, Scotland. At the time of her death, Tsairis was a junior photojournalism student in the Newhouse School.

The work of current and past competition winners can be viewed online at http://www.alexiafoundation.org/archives. For more information about the competition, contact Kennedy at 315-443-7388 or trkenned@syr.edu.