An emerging form of “social radio” pioneered by School of Information Studies Professor Lee McKnight and the iSchool’s Wireless Grids Innovation Testbed (WiGiT) is being showcased this spring in its first public forums. 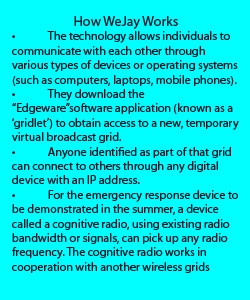 Called “WeJay,” the beta product is the first wireless grid-enabled application to emerge from the research undertaken at the WiGiT lab at the iSchool. The innovation uses the multicast capabilities of wireless grids, a breakthrough “Edgeware” software for mobile and other electronic devices, and mashes up existing content, radio signals, users and bandwidth to create a form of community broadcasting.

According to McKnight, “Edgeware” dynamically meshes devices and media, permitting secure, intelligent ad hoc formation of networks of devices without a dedicated server for network management. The new capability essentially comprises a personal cyber-infrastructure, creating a “personal cloud of your machines, your devices, your content,” he says.

The patent-pending technology was licensed to Wireless Grids Corp., which spun out of Syracuse University in 2004 and continues to collaborate closely with its alma mater. WeJay is being tested at BOCES in Rockland County, N.Y., and is in a beta trial on the SU campus as well. Several other real-world venue rollouts are planned for later this year, all as part of the Wireless Grid Innovation Testbed’s distributed testbed.

At BOCES Riverview, a school for students with disabilities, WeJay is being assessed for its practical classroom applications. There, a group of high school students is using it to produce their own individual and collaborative radio shows. “It’s a real thrill to see what kids are doing with wireless grid applications to improve their own education in BOCES now,” McKnight says. “It’s great seeing the early products being refined through user interaction into practical tools by the very first and earliest adopters. It is really nice to see this validation from the essential group of first live users, and to see that what we hoped would be an empowering and enabling technology for people to help themselves is already helping some students.”

The WeJay social radio field test is part of iSchool doctor of professional studies student Sarah Chauncey’s dissertation. As the Rockland BOCES Director of Information Resources and Learning Technologies, Chauncey is overseeing 24 students doing podcasts on topics as diverse as the history of bowling shirts, passages in great literature and Superbowl pregame commentary, and it has been a rewarding project, she says.

She describes how the test environment has revealed a wide assortment of ways that people can use social radio. “The kids have pushed the envelope for things they want to have happen with the product. They are not only working on their oral and written communication skills, but looking at the station as a way to enhance collaboration and communication,” Chauncey notes. The flexibility and diversity of podcasting permits the students to use their voices and also determine how they want to be involved—whether as on-air talent, sideline commentators or doing the background components of technical or music production in radio. As a result, “One thing I know is that while technology keeps changing, radio is becoming even stronger as a means to communicate. I think radio is going to be around for a long time,” she observes.

A WiGiT beta trial, based from the SU campus, is currently recruiting participants among faculty and student audiences at the iSchool, the S.I. Newhouse School of Public Communications and other schools on campus. That effort is being managed by Patricia McKenna, also a doctor of professional studies (executive education) doctoral student, and an information consultant from Vancouver Island (Victoria), British Columbia. Her dissertation is framed in emergent theory and supportive of the notion of emerging media ecology.

“We think of radio in terms of music, but it really can be so much more—whatever people want to create around sound,” McKenna notes. Her research involves how WeJay supports collaboration, interactivity and the social online environment, specifically as related to ambient information, ambient journalism and ambient enterprise. McKenna also is looking at how creativity is affected when people interact and collaborate. In that context, “WeJay as a wireless grid-enabled technology can begin to assist us in coming to understand more about wireless grids, the emergent media ecologies and how ambient ecologies are combining and can cut across all sorts of disciplines,” she explains.

The technology also is scheduled to be showcased in late March at the TEDx Harlem conference, where a live demonstration and press conference are planned to announce further technical developments, describe early testbed rollout activity and announce WiGiT Version 0.1 Open Specifications.

Distributed audio sharing across a wireless grid was first demonstrated by iSchool students working with McKnight in 2003. By 2004, McKnight had launched the spin-out firm, Wireless Grids Corp., to license the rights to commercialize the technology to create a wide variety of wireless grid. In 2009, McKnight resigned as CEO of WGC after a merger with Varsity Media Group, and became principal investigator of the Wireless Grid Innovation Testbed project. McKnight remains on the board of directors of WGC.

The WiGit project also has an emergency responder project under way that is taking place with National Science Foundation support. That initiative permits responders to communicate, regardless of what radio frequencies or types of communication devices they use. WiGiT is planning a summer 2012 demonstration of that capability involving the Madison County Sherriff’s Office and Syracuse City Police, among other departments.

Researchers from SU, Virginia Tech, Massachusetts Institute of Technology, Tufts University, Rochester Institute of Technology and others have collaborated on the project. More than 60 campuses, companies and communities have joined WiGiT, with McKnight planning to announce new members at the time of the TEDxHarlem event.

The testbed was created by Syracuse University in concert with researchers from Virginia Tech, with support of National Science Foundation Partnership for Innovation program grants.