The rise of Afro-Latin American social movements is the basis of a new book, edited by Syracuse University professors Kwame Dixon and John Burdick. “Comparative Perspectives on Afro-Latin America” (University Press of Florida, 2012) is a collection of original essays detailing the experience of blackness and cultural difference, black political mobilization and state responses to Afro-Latin activism throughout Latin America. The volume has deep regional coverage and explores the range of different black movements across the Americas. 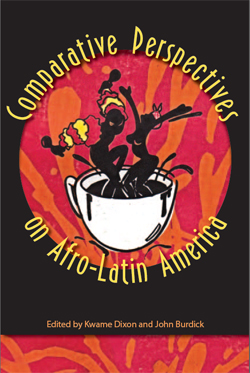 “As academic interest in Afro-Latin America increases, so does the need for a fresh text detailing issues facing black populations throughout the region,” says Dixon, assistant professor of African American studies in SU’s College of Arts and Sciences. “We encouraged our contributors to move beyond traditional borders in this wide-ranging study.”

Generally described as Latin American people of African descent, Afro-Latin Americans occupy parts of North America and most of Central America, South America and the Caribbean. The fusion of African cultures with European and indigenous peoples in Latin America over the past 600 years has produced many social, cultural and political developments.

Against this backdrop, says Burdick, is a powerful, provocative story—one that compels scholars to re-examine how the history of the Americas is taught. “The thematic organization and holistic approach of our book truly set it apart,” he adds. Burdick is an anthropology professor in both The College of Arts and Sciences and the Maxwell School of Citizenship and Public Affairs.

Already, “Comparative Perspectives” has drawn praise from colleagues. Jerome Branche, associate professor of Latin American and cultural studies at the University of Pittsburgh, says Dixon and Burdick’s book is long overdue. “’Comparative Perspectives’ is at the cutting edge of scholarship,” he notes. “It is sure to become a standard reference.”

Nicola Foote, associate professor of Latin American history at Florida Gulf Coast University, echoes these sentiments. “’Comparative Perspectives’ is a powerful and original collection of essays, [providing] a much needed overview of the development of the Afro-Latin American rights movement,” she adds.

An expert in Latin America and the Caribbean, Dixon develops comparative and methodological approaches for the study of racial and gender discrimination in context of international human rights, democracy and conflict resolution. Other themes of his research include the social construction of national identity, social movements and the role of popular culture (i.e. film, literature and music) as concrete forms of hegemonic and counter-hegemonic discourses.

Burdick studies the role of grassroots action in bringing about social, political and cultural change in Brazil and Latin America. His empirical research focuses on liberationist Catholicism, Pentecostalism, African religious movements, the Workers’ Party, black consciousness movement and the landless workers’ movement. He is a research director for advocacy and activism in the Program for the Advancement of Research on Conflict and Collaboration (PARCC) in the Maxwell School.