Hunted almost to extinction, North Atlantic Right Whales are among the most endangered in the world, with fewer than 500 alive today. Syracuse University biologist Susan Parks has been studying right whales for almost 15 years as part of an international conservation effort to reverse their decline.

Serendipitous measurements of underwater noise collected as part of Parks’ research two days before and after the 9/11 terrorist attacks while listening for whale sounds are a critical component of a groundbreaking study published Feb. 8 in the Proceedings of the Royal Society B, linking underwater noise and stress in whales. Proceedings B is the Royal Society of London’s flagship biological research journal.

Right whales use low-frequency sounds to communicate, which can be detected over long distances. Parks, recently appointed to the Department of Biology in SU’s College of Arts and Sciences, studies whale acoustic communication. Ships emit low-frequency noise that overlaps with the whale sounds. Scientists have learned that underwater noise can interfere with whales’ ability to communicate, but they did not know whether the noise had a physiological effect on whales—until now. The new study provides the first evidence that associates ship noise with chronic stress in whales, a factor that may be impacting their recovery.

“This is definitely a very important piece in the puzzle that lends credence to the idea that, yes, we potentially have a problem out there and we need to learn a lot more about it,” says Rosalind Rolland, a senior scientist at the New England Aquarium in Boston and lead researcher for the study. 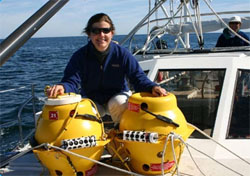 Parks first started collaborating with the New England Aquarium’s research team in 1998 as a graduate student in the Massachusetts Institute of Technology and Woods Hole Oceanographic Institution Joint Program in Oceanography. The new study came about by chance. During the summer of 2001, Parks was conducting research in the Bay of Fundy, located between Maine and Nova Scotia, collecting acoustic recordings of right whale sounds. While recording the sounds, her research team also recorded background ocean noise. They noticed that the background noise significantly dropped during the few days after 9/11.

“Similar to air travel, shipping decreased dramatically for a short period of time after 9/11,” Parks says. “We noticed the ocean was very quiet, but our acoustic data set was not large enough to draw definitive conclusions.”

By happenstance, Rolland had been collecting whale fecal samples with the help of a feces-sniffing dog over the same period Parks was collecting her data. Rolland analyzes whale scat for hormones involved with reproduction, sexual maturity and stress. The Right Whale Conservation Medicine Program at the New England Aquarium pioneered the use of scent-detection dogs to collect whale scat, which floats on top of the water. Rolland similarly noted a decrease in the levels of stress hormones in the scat over a short period of time following 9/11.

But it wasn’t until 2009, as Rolland was preparing for a workshop on underwater noise and stress for the Office of Naval Research, that the researchers realized how their data, collected for unrelated projects, might intersect. The subsequent analysis, funded in part by the Office of Naval Research, showed that, over a five-year period, stress-hormone levels in the scat were at the lowest point only during the days immediately following 9/11, when both underwater noise levels measured in Parks’ data and ship traffic were down.

“It was a fortunate coincidence that we were both collecting data during the same time period,” Parks says. “But how do you make the ocean quiet? We’re now looking at whether whales change their behavior in response to noise.”

In a Feb. 8 article in Science Now, Rolland notes that while there may be ways to build quieter ships, oil and gas exploration, wind farms and sonar all add to underwater noise pollution. “The big message is that there’s enough noise in the oceans that we should be concerned,” she says. Scientists from the Alaska Fisheries Science Center, NOAA National Marine Mammal Laboratory, Cornell University, Duke University and the University of Washington also contributed to the study.

Prior to coming to SU, Parks held appointments at Pennsylvania State University, Cornell University and Woods Hole Oceanographic Institution. In 2009, Parks received a Presidential Early Career Award for Scientists and Engineers (PECASE), the highest honor by the U.S. government for outstanding scientists and engineers, for her work with whales.