New book focuses on policing in Syracuse’s Near Westside neighborhood

The Gifford Street Community Press will celebrate the publication of its second book, “I Witness: Perspectives on Policing in the Near Westside,” from 5:30-7 p.m. Thursday, Feb. 16, at La Casita Cultural Center, 109 Otisco St., Syracuse. The celebration is free and open to the public. The Press published “Home: Journeys into the Westside” in August 2011. 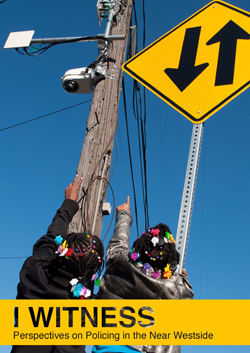 In a series of sometimes-poignant—yet ultimately hopeful—essays, “I Witness” brings together the voices of people who live on Syracuse’s Near Westside, the police who patrol the neighborhood and people working in organizations that serve the community. “This book grew out of tension, but arcs toward dialogue and understanding,” writes Ben Kuebrich, editor. “The goal is to give witness to the many perspectives on policing in the neighborhood.”

Kuebrich is a graduate student in the Department of Writing’s Composition and Cultural Rhetoric Program in Syracuse University’s College of Arts and Sciences. He spent the past two years working with the Gifford Street Community Press Editorial Board to identify residents, community workers and police officers willing to share their stories. His faculty advisor is Steve Parks, associate professor of writing and rhetoric.

“(‘I Witness’) is a powerful reminder that truly seeing reality requires looking at it from many perspectives, some of which appear to be contradictory,” write the members of the Gifford Street Press Editorial Board in the book’s introduction. “Rather than speaking truth to power, this book speaks truth to fear. One of the things that we believe must change before progress can happen is the terrible relationship between police and community. Hearts and minds on both sides need to be changed. This book is the beginning of that process.”

The Gifford Street Community Press was created in 2010 to provide a venue for the multilingual and multicultural voices of Westside residents to be heard and shared. The press collaborates with the Westside Residents Coalition (WRC), the Syracuse Alliance for a New Economy (SANE) and SU’s Writing Program.

The idea for the book took root two years ago as part of a collaborative effort among the WRC, SANE, SU’s Near Westside Initiative and the newly formed Police Delegation to promote dialogue between the residents and the Syracuse City Police Department. Led by the Police Delegation, residents began to meet regularly with First Deputy Police Chief David Barrette to air grievances and resolve differences. Barrette’s essay, “Police/Community Relations: A Work in Progress,” is included in the book.

“Communication is key to improving relationships, including the relationship between the police and the community,” Barrette says. “I hope that (‘I Witness’) will be another form of communication that will contribute to the improvement of the police/community relationship on the Westside.”