Internationally renowned artist Shimon Attie will lead and host a new cross-disciplinary speaker series at Syracuse University on art, memory, community and commemoration. “Memory and Commemoration, as Fact or Fiction” will feature four speakers, including Attie, whose work addresses the complex issues of public remembrance and memory making. The series is co-sponsored by the College of Visual and Performing Arts (VPA) and the SU Humanities Center in The College of Arts and Sciences. 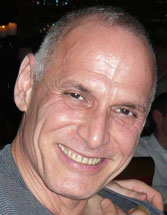 Attie, who is VPA’s Sandra Kahn Alpert Visiting Artist and the SU Humanities Center’s Jeanette K. Watson Distinguished Visiting Collaborator for the spring 2012 semester, will kick off the series and present relevant selections of his work on Thursday, Jan. 26. All talks in the series will be held at 6 p.m. in Watson Theater in the Menschel Media Center and are free and open to the public. Parking for the public is available for $4 in Booth Garage; parking in Booth is free for SU students, faculty and staff with a valid SU parking permit.

Other upcoming speakers include:

Attie’s work spans photography, video, site-specific installations, public projects and new media. His projects allow for reflection on the relationship among place, memory and identity. Using a variety of contemporary media, many of his works give visual form to memory by animating public sites with images of their lost histories. His more recent projects have involved animating public and private memory through immersive multiple-channel video installations.

Attie’s work has been exhibited and collected by numerous museums around the world, including the Museum of Modern Art, the Corcoran Gallery of Art and Centre Pompidou. In addition, he has received numerous visual artist fellowships, including those from the Guggenheim Foundation and Harvard University’s Radcliffe Institute, as well as the Rome Prize. Several books have been published on his work, which has also been the subject of a number of films. He is currently working on a permanent memorial artwork for San Francisco police officers who have been killed in the line of duty.

“Memory and Commemoration, as Fact or Fiction” is part of a cross-disciplinary colloquium for SU graduate students. The series is generously supported by an award from the Andrew W. Mellon Foundation for the Central New York Humanities Corridor, with additional support from VPA’s Department of Communication and Rhetorical Studies and the SU Public Memory Project.