Light Work has announced the exhibition “Looking & Looking,” featuring photographs by Jen Davis and Amy Elkins. Both artists create work that focuses on gaze and identity, with Davis looking at herself and Elkins looking at young male athletes. The images in the exhibition explore the perception of how men and women are supposed to appear in society—men should be strong and confident, women should be beautiful—and the crafting of a self-image. 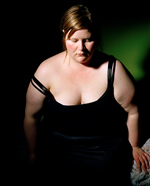 Davis creates self-portraits that deal with issues surrounding beauty, identity and body image of women, and challenges the perceptions and stereotypes of how women should look in their physical appearances. Elkins depicts the more aggressive, competitive and violent aspects of male identity in her series “Elegant Violence,” which captures portraits of young Ivy League rugby athletes moments after their game. Elkins’ images explore the balance between athleticism, modes of violence or aggression and varying degrees of vulnerability within a sport where brutal body contact is fundamental.

Both artists focus on the construction of identity—the players are astutely aware of how they are presenting themselves, while Davis draws attention to her own self-image in a more emotional way. Shown together, the works of Davis and Elkins urge the viewer to consider expectations and perceptions (both societal and individual) of identity.

Davis received her M.F.A. from Yale University, and her bachelor’s degree from Columbia College Chicago. Her work has been exhibited internationally, including at Musée de l’Elysée in Lausanne, Switzerland; Joy Wei Gallery in New York; SI FEST: Savignano Immagini Festival in Italy; Museum of Fine Arts, Boston; Center for Photography at Woodstock; Stephen Daiter Gallery in Chicago; Milwaukee Art Museum; and Galerie Priska Pasquer in Cologne, Germany, among others. Her photographs are in the collections of the Art Institute of Chicago, the Sir Elton John Photography Collection, and the Library of Congress. Davis is represented by Lee Marks Fine Art. 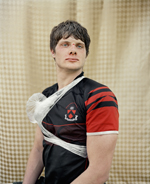 Elkins received her B.F.A. in photography from the School of Visual Arts in New York City. Her work has been exhibited both nationally and internationally, including shows at Kunsthalle Wien in Vienna; The PIP International Photo Festival in Pingyao, China; Gallery Elsa in Busan, South Korea; National Arts Club, Tina Kim Gallery, and Yancey Richardson Gallery in New York, among many others. Elkins and Cara Phillips co-founded wipnyc.org, a platform for showcasing both established and emerging women in photography. Elkins is represented by Yancey Richardson Gallery in New York.