In “Shadow and Act,” a collection of essays about the black experience, Ralph Ellison describes jazz as the “art of assertion within and against the group.” Each jazz moment, he writes, springs from a context in which each musician challenges the rest of the group—every solo representing a link in the chain of tradition. 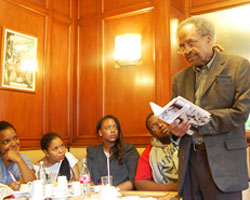 Although Ellison’s characterization is nearly 50 years old, it still resonates among scholars of the African diaspora. Among those captivated by it is Janis Mayes, Syracuse University professor who uses the “jazz moment” to conceptualize her popular summer program, “Paris Noir.” Each summer for the past decade, she has led 12-15 students on an intense journey through black literature, art and contemporary life in Paris and the surrounding “banlieue.” The result is a signature course that has not only put SU on the diaspora map, but also addressed the question “What does Paris Noir mean today?”

Mayes elaborates on the “jazz moment” metaphor. “Ralph Ellison thought that the balance struck among players in a jam session was a ‘marvel of social organization,’” she says. “This kind of framework applies to ‘Paris Noir’ because it supports an exchange of different perspectives. If the seminar was a piece of music, ‘Paris Noir’ would be the ‘theme,’ and the responses to my question [‘What does the “noir” in Paris Noir mean today?’] would be a set of variations.”

One way to understand the “jazz moment”—and Mayes’ project in general—is to look at its historical context. During the 1920s and ‘30s, Harlem was home to a growing number of African Americans (many of whom were from the South), whose experiences with racism were conveyed through art, literature and music. This flowering of black consciousness also occurred in France, which attracted many students, artists and intellectuals (not to mention, returning World War I soldiers) from around the globe. The French slogan of equality, fraternity and liberty must have seemed like a hit of fresh air to people under the yoke of colonization or segregation. Just some of the many ex-patriots were the cultural icon Josephine Baker; writers Langston Hughes, James Baldwin, Anna Julia Cooper, Richard Wright and Barbara Chase-Riboud; artists Henry O. Tanner and Beauford Delaney; and musicians Louis Armstrong, Ada “Bricktop” Smith, Duke Ellington, Miles Davis, Dexter Gordon and Nina Simone.

It is against this milieu that Mayes leads one of SU’s most innovative courses. During the five-week program, students stay at an apartment hotel, meet daily at the historic Café de Flore (a favorite of Baldwin and philosopher Jean-Paul Sartre), visit historical and cultural landmarks, and discuss topics ranging from history and culture to race and identity. “Many conversations revolve around the idea of discernment—seeing what others regard as invisible in black culture,” she says. “The students rigorously explore the ‘noir’ in French society, as it is expressed in the arts and in everyday life.”

The only program of its kind in the academy, “Paris Noir” is divided into three parts. The first, “On Becoming Paris Noir,” examines the historical, social and political forces that led to a black presence in Paris. “To focus on this aspect, we visit various museums and historical landmarks,” says Mayes. “At the Louvre, we study the large glass pyramid by I.M. Pei outside the museum’s entrance and the Egyptian art inside, drawing connections between Africa and the modern French world. We also analyze Picasso’s masks, which capture a borrowed aesthetic from ancient African sculpture, and Géricault’s highly influential ‘Raft of the Medusa.’”

The second part of the course examines the Paris Noir of today. Here, students pore over literary and cultural texts, as well as engage with such black luminaries as saxophonist Archie Shepp, writer Jake Lamar, poet/activist Sonia Sanchez, historian Pap Ndiaye, photographer Kim Powell, publisher Christiane Yandé Diop and members of the Alvin Ailey American Dance Theater. (A few lucky students were able to meet singer Nina Simone and witness her last concert in France, months before her death in 2003.)

The third part of “Paris Noir” is an independent research project of the student’s choice. Mayes says this part can often lead to a personal awakening that is gratifying for student and teacher alike. “I want students to have a clearer sense of the beauty and struggle of living somewhere else and then use it to better understand themselves. I want ‘Paris Noir’ to touch them on a personal level,” she says. “Research can provide that catalyst.”

Kishauna Soljour and Tiarra Currie are undergraduates who attended “Paris Noir” last summer. “’Paris Noir’ changed my life as a scholar and a person through a process I call ‘re-learning,’” says Soljour, a junior majoring in African American studies and television, radio and film. “In the United States, I had been socialized to accept prepared truth and to regurgitate it, as if it were derived from my own psyche. In Paris, I’ve learned to question, communicate and arrive at my own conclusions about my black identity. As a result, I no longer question who I am. I have become the master of my destiny by accepting my identity with clarity and purpose.”

Currie—a senior majoring in psychology, with a triple minor in child and family studies, early childhood and sociology—had a similar epiphany. She shares several experiences that reinforced her decision to study abroad, including one involving a panel discussion of black women that was so moving, it “almost brought tears to [her] eyes.” “’Paris Noir’ exposed me to history like never before,” she says. “I felt like I had learned more about myself in those five weeks than in the past 20 years.”

Currie credits “Paris Noir” for helping her embrace her own blackness. “I learned that there is no one black face or black story,” she continues. “All of us come from different backgrounds and have different complexions and experiences. It this common thread of racism and history that binds us together.”

Open to graduates and undergraduates alike, “Paris Noir” is co-administered by SU Abroad and the Department of African American Studies in SU’s College of Arts and Sciences. (The course is crossed-listed among AAS; English; women’s & gender studies; and the French program in languages, literatures, and linguistics.) Students hail from all over the country.

Samir Meghelli was a junior at the University of Pennsylvania when he enrolled in “Paris Noir” in 2003. Since then, he has returned to Paris many times to conduct research and to lead seminars for SU on the history of hip-hop in France. “The ‘Paris Noir’ program has had an indelible impact on my intellectual development and scholarly trajectory,” says Meghelli, a Ph.D. candidate at Columbia University. “One leaves the program with a far more profound understanding of the global nature of the African diaspora.”

Meghelli also credits “Paris Noir” for laying the groundwork for his senior thesis, his doctoral dissertation and his book, “The Global Cipha: Hip Hop Culture and Consciousness” (Black History Museum Press, 2006). “The course is a remarkable way of merging theory and practice, of making Paris our classroom,” he adds.

David Baker G’05, who handles rights and clearances for ABC News, echoes these sentiments. “The program helped me understand race and identity as constructs that shape political, economic and social discourse,” he says. “It also helped me acquire a broader view of the effects of race and identity, domestically and internationally.” Baker was surprised to learn that many young Parisians’ views of blacks were shaped by American television, especially rap videos.

As “Paris Noir” enters its second decade, Mayes is optimistic about the future. She ultimately hopes to see the creation of a “trans-oceanic corridor,” linking SU with similar academic programs throughout Africa, Europe and the Americas. These kinds of connections, she hopes, will cultivate alumni and supporters of SU, while stimulating other kinds of immersion opportunities (e.g., internships and co-ops).

“By having a greater understanding of the racial and cultural realities of Europe, our students can view themselves as part of a global community,” she concludes. “I want all of our students to use ‘Paris Noir’ to gain global literacy and to experience the agency that comes with it.”