When Secretary of State Hillary Clinton recently announced at the United Nations Human Rights Commission in Geneva, Switzerland, that the United States would consider gay rights when making future aid and asylum decisions, she acknowledged what scholars and activists have known for a long time: that the struggle to recognize rights around sexual orientation must be understood in a global context. “Being gay is not a Western invention. It is a human reality,” Clinton told the delegates. 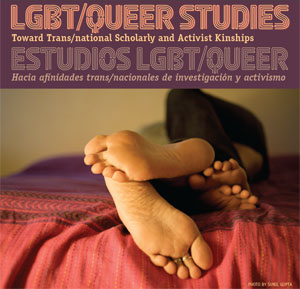 Her demand for recognition of gay rights as human rights broaches a complex question about sexual orientation and sexual identity around the world: Can one speak of sexuality in universal terms that transcend national boundaries, cultural differences and diverse histories? This important question and many other ones inspired the international conference “LGBT/Queer Studies: Toward Trans/national Scholarly and Activist Kinships,” which SU hosted at its SU Abroad Madrid Center in July 2011. The event was part of Transnationalizing LGBT Studies, a multi-year Chancellor’s Leadership Project that responds to the need to develop global and comparative perspectives on sexual identities, cultures and communities. “We are always looking for ways to embed our scholarship into broader contexts of teaching and learning,” says Chancellor Nancy Cantor. “The Madrid conference presented many opportunities to expand our understandings of the issues woven into queer lives as they are contained in and shaped by images and networks of power within and across national boundaries.”

Margaret Himley, associate provost for international education and engagement, echoes these sentiments, saying the conference furthered an ongoing conversation about the transnational intersections of sexual and gendered identities, theories, politics and collective action. “We live in a transnational and technologically mediated world where people, ideas, images and capital move across borders in rapid and complicated ways, thus opening up possibilities and creating challenges,” says Himley, who also serves as professor of writing and rhetoric in the College of Arts and Sciences‘ Writing Program. She co-founded the Lesbian, Gay, Bisexual and Transgender (LGBT) Studies Program at SU with Andrew London, professor and chair of sociology.

Featuring more than 130 participants from 24 countries on five continents, the interdisciplinary conference brought together scholars and activists from a variety of fields, including sociology, anthropology, political science, literary studies, communication, rhetoric, history and public administration. It also included 30 panelists and four keynote speakers: Zackie Achmat, co-founder and former chairman of the Treatment Action Campaign, South Africa’s most important AIDS organization; Sunil Gupta, an award-winning photographer, writer and curator based in London and New Delhi; Jin Haritaworn, a University of Helsinki fellow who studies the intersection of race, gender and sexuality in multicultural Europe; and Ghadir Hilmi, a queer Palestinian activist.

Organizers and participants agreed that Achmat’s opening address about sexual orientation equality in Africa was one of the conference highlights. Like Clinton, Achmat emphasized the fundamental importance of locating LGBT activism within the context of human rights. But he also stressed the need for transnational solidarity and a deeper understanding of local, national and regional differences. “An uncritical adoption of the American, Australian and European rights-based strategies almost exclusively focused on the lobbying of parliaments, litigation in the courts and creating visibility through the media has led to an impasse in Africa and allowed the forces of reaction to organize,” he told attendees. Achmat went on to argue that LGBT activism in Africa must also address inequalities of class, gender, ethnicities, religion, race and tradition. He called on LGBT scholars to develop deeper understanding of diverse sexualities within global, national and local contexts.

Andrew London and Roger Hallas, current co-directors of the LGBT Studies Program, reflected on the success of the Madrid conference—how it grew out of a smaller international conference at SU from the year before, how a course offered by LGBT Studies at SU Madrid provided the impetus for the location, and how the conference has seeded a transnational dialogue among scholars and activists.

London says the conference and its umbrella project, Transnationalizing LGBT Studies, are about global engagement. “Since we launched this project, we have been amazed at how many people have enthusiastically joined the conversation via our listserv and the conferences we have hosted; humbled by how much good work has been done, as well as by how much we all still need to figure out, know and do; and inspired to think of ways to develop and sustain connections between LGBT/queer scholars, activists and artists around the world,” he says. “The desire for opportunities to engage questions related to LGBT/queer sexualities in a rapidly globalizing world is enormous.”

Add to that interdisciplinary education, says Hallas, an associate professor of English. As an example, he cites the LGBT Studies Program, which involves faculty members from Arts and Sciences, the Maxwell School of Citizenship and Public Affairs, the School of Education, the School of Architecture, the College of Law and the College of Visual and Performing Arts. The program offers an undergraduate minor in LGBT studies, which has become one of SU’s most popular interdisciplinary minors since its establishment in 2006. Hallas notes how the minor appeals to a wide range of students, not only to those who identify as lesbian, gay, bisexual, transgender or queer. “Students drawn to the minor recognize that LGBT studies are not only about marginalized sexual communities, but also produce the kind of critical knowledge that has wide-ranging implications for our understanding of culture and society at large,” he says. “Such research speaks to the vital concepts of political governance and social policy, such as family, nation and citizenship, as well as to more philosophical concepts, such as time and happiness.”

Benjamin Zender, senior administrator for SU’s Forensic and National Security Sciences Institute and a current writing and rhetoric major and LGBT studies minor, labels the program—and Transnationalizing LGBT Studies, in particular—as one of SU’s more viable examples of collaborative scholarship. Much of this, he says, is because LGBT studies as a field of study operates on the borders of multiple disciplines. “I think what’s notable about our LGBT program is that it has been able to document and build on work that has been happening here for a while,” he says. “The combination of cutting-edge curriculum, a large contingent of interdisciplinary faculty and a strong sense of program identity and mission has made us successful.”

This interdisciplinary approach is further underscored by the Journal of Diverse Sexualities, a forthcoming open-access, peer-reviewed journal devoted to LGBT/queer scholarship, criticism and commentary, which will be published by Syracuse University Press. Scheduled for launch in early 2013, with a double issue featuring selected highlights from the project’s two conferences, the journal will foster a transnational and interdisciplinary exchange of knowledge among researchers, teachers, artists and activists. “We chose the free, open-access format to permit a wider readership and address those people often denied access to traditional scholarly journals—that is, people outside the academy,” says Hallas. “Inspired by Achmat’s call at the Madrid conference for more scholarship that activists and organizers can use, the journal aims to sustain a transnational and democratically accessible space for knowledge about diverse sexualities.”

Hallas and London are convinced that Transnationalizing LGBT Studies and the emerging Journal of Diverse Sexualities promote understanding and equality among all people. “Learning about any oppressed group,” London says, “has the potential to promote change and is of value to anyone interested in equality and justice.”