Syracuse University Library has acquired the personal papers of the flamboyant and trend-setting architect Morris Lapidus. Lapidus, who died in 2001, is perhaps best known for hotels like the Fontainebleau, Americana and Eden Roc in Miami Beach, Fla., buildings which embodied the growth of leisure in American life during the 1950s and 1960s. The Fontainebleau has served as a backdrop for variety of iconic scenes in American film, including the James Bond thriller “Goldfinger” (1964). Most of Lapidus’ buildings exhibited a mélange of historical styles—French provincial, Italian and Baroque—and anticipated the post-modernism of later architects. 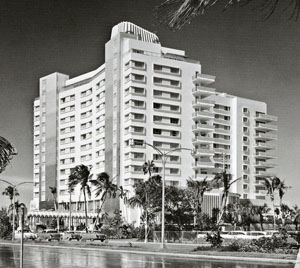 Lapidus was born in Odessa, Russia, in 1902, but his family immigrated to the United States soon thereafter. As a wide-eyed youth, he marveled at the splendor of Coney Island and he would later impart a similar spirit of excess to his work as an architect. That spirit would place him at odds with his function-minded modernist peers. However, contrary to the editor’s choice of title for his 1996 autobiography, “Too Much is Never Enough,” Lapidus was interested less in hedonism than he was in a “quest for emotion and motion in architecture.”

Frustrated by his sometimes antagonistic relationship with the architectural establishment, Lapidus destroyed many of his firm’s records when he retired in 1984. However, he retained a core collection of especially valuable papers that he entrusted to his last collaborator and confidant, architect Deborah Desilets. The archive includes a large collection of photographs dating to the 1920s, conceptual drawings, manuscript drafts of his written works and correspondence with his long-time friend, mystery writer Ellery Queen.

Desilets approached Syracuse, which has held a small Lapidus collection since 1967, and a gift of the material was finalized in December. Speaking on her decision to place the archive with Syracuse, Desilets says, “The archive is an extremely important missing link in the discourse on Lapidus’ influence on 20th-century architecture. I am thrilled to place it in such a distinguished research institution where it will be available for use by generations of students and scholars.”

In Syracuse’s Special Collections Research Center, the Lapidus archive will reside in one of the most important mid-century modern collections in the country. Among the other architects represented are Marcel Breuer, William Lescaze and Richard Neutra, as well as designers like Russel Wright and Walter Dorwin Teague.

Syracuse School of Architecture faculty member Jon Yoder offered this assessment of the Lapidus archive’s value for teaching and research: “The recent proliferation of architect-designed boutique hotels, coupled with the pervasive disciplinary focus on architectural effects suggests that Lapidus was indeed one of the most influential architects of the 20th century. This acquisition of his personal archive comes as welcome news to designers and scholars who are finally beginning to reassess the lavish contributions of this much-maligned architect across a surprisingly broad spectrum of design disciplines.”