‘300 Miles to Freedom’ to be screened at Harlem’s historic First Corinthian Baptist Church on Dec. 15

The New York City debut of “300 Miles to Freedom,” a documentary film celebrating the life of fugitive slave John W. Jones, will take place at the historic First Corinthian Baptist Church in Harlem (1912 Adam Clayton Powell Jr. Blvd.) on Thursday, Dec. 15. Doors open at 6:30 p.m. The event will begin at 7 p.m. with a performance by the church’s Gospel Choir and a Q-and-A with the filmmakers. 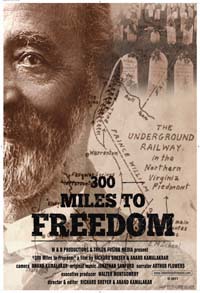 The film tells the story of Jones, a fugitive slave who escaped bondage in Leesburg, Va., in 1844 and traveled the Underground Railroad to Elmira, N.Y. He arrived there as a 27-year-old illiterate with $1.46 in his pocket. By his death in 1900, he was a wealthy, literate, respected member of the community.

The film was created by Richard Breyer, professor and co-director of the Documentary Film and History Program in the S.I. Newhouse School of Public Communications, and Anand Kamalakar G’95, a Newhouse School alumnus and founder of Trilok Fusion Media in Brooklyn.

The filmmakers take Jones’ route from Leesburg to Elmira, and tell his story through the voices of those they meet along the way—historians, ferry boat captains, ministers, farmers, restaurant and gas station owners. And they tell the Elmira chapters of the film in the same way—weaving the voices and images of the past with those of the present.

The original concept for the film came from SU alumnus Walter Montgomery ’67, CEO and partner with Robinson, Lerer and Montgomery LLC, who is a native of Elmira. A member of the advisory board for SU’s Maxwell School of Citizenship and Public Affairs, he served as the film’s executive producer. Arthur Flowers, English professor in SU’s College of Arts & Sciences, performs the voice of Jones.

Tickets are $10 for general admission and $5 for students or seniors, but no one will be turned away for financial reasons. Tickets can be purchased in advance at http://www.300milestofreedom.com.