The appearance of oxygen in the Earth’s atmosphere probably did not occur as a single event, but as a long series of starts and stops, according to an international team of researchers who investigated rock cores from the northwest region of Russia. Their findings were published in the Dec. 1 issue of Science Express. Christopher Junium, a geochemist in the Department of Earth Sciences in Syracuse University’s College of Arts and Sciences, was a member of the team. 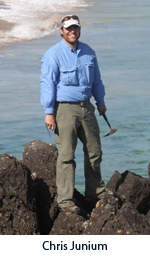 Science Express provides rapid electronic publication of selected research papers that have recently been accepted for publication in Science, the premier journal of the American Association for the Advancement of Science.

“We’ve always thought that oxygen came into the atmosphere really quickly during an event,” says Lee R. Kump, professor and head of geosciences at Penn State and corresponding author of the study. “We are no longer looking for an event. Now we are looking for when and why oxygen became a stable part of the Earth’s atmosphere.”

The research team obtained the rock samples during the summer of 2007 as part of the Fennoscandia Arctic Russia-Drilling Early Earth Project (FAR DEEP). The FAR DEEP expedition team, which was part of the International Continental Scientific Drilling Program, drilled a series of shallow, two-inch-diameter cores and, by overlapping them, created a record representing stone deposited during the Proterozoic Eon (2,500 million to 542 million years ago).

The researchers report in Science Express that their analysis of the cores from Russia compared with a previous analysis of core samples from Gabon support the conclusion that the Great Oxidation Event played out over hundreds of millions of years, rather than as a single large event over a short period of time. The researchers found that oxygen levels gradually crossed the low atmospheric oxygen threshold for pyrite oxidation about 2,500 million years ago. Pyrite is an iron sulfur mineral. Their findings suggest that oxygen levels rose at an ever-increasing rate through the Paleoproterozoic to about 1 percent of the present atmospheric level.

“The definition of when an oxygen atmosphere occurred depends on which threshold you are looking for,” Kump says. “It could be when pyrite becomes oxidized, when mass-independently fractionated sulfur disappears or when deep crustal oxidation occurs.”

Mass-independent fractionated sulfur disappeared about 2,400 million years ago, according to the study. When that happened, the air on Earth was still not breathable by animal standards. Even when red rocks containing iron oxides appeared 2,300 million years ago, the air was still unbreathable. “At about 1 percent oxygen, the groundwater became strongly oxidized, making it possible for groundwater seeping through rocks to oxidize organic materials,” Kump says.

Initially, any oxygen in the atmosphere produced by the photosynthesis of single-celled organisms was used up when sulfur, iron and other elements oxidized. When sufficient oxygen accumulated in the atmosphere, it permeated the groundwater and began oxidizing buried organic material, which contains carbon, to create carbon dioxide.

The cores from the FAR-DEEP project were compared with the Francevillian samples from Gabon, which were analyzed by a different scientific team, using the ratio of carbon isotopes 13 and 12 to see if the evidence for high rates of oxygen accumulation existed worldwide. Both the FAR-DEEP project’s cores and the Francevillian cores show large deposits of carbon in the form of fossilized petroleum. Both sets of cores also show similar changes in carbon 13 through time, indicating that the changes in carbon isotopes occurred worldwide and oxygen levels throughout the atmosphere were high. The scientists also analyzed the samples for nitrogen isotopes. “The nitrogen cycle is sensitive to the amount of oxygen in the atmosphere and in ocean surface water,” Junium says. “Nitrogen isotopes give us another tool to help us understand how oxygen evolved on Earth.” Junium’s role in the project was to analyze nitrogen and organic carbon isotopes in the core samples. He is presenting findings from this project at a meeting of the American Geophysical Union in San Francisco, Dec. 7.

“Although others have documented huge carbon isotope variations at later times in Earth history associated with stepwise increases in atmospheric oxygen, our results are less equivocal because we have many lines of data all pointing to the same thing,” Kump says. “These indications include not only carbon13 isotope profiles in organic mater from two widely separated locations, but also supporting profiles in limestones and no indication that processes occurring since that time have altered the signal.”

The National Science foundation and the NASA Astrobiology Institute supported the U.S. portion of this research.