On Nov. 11, Samba Laranja: the Syracuse University Brazilian Ensemble won a 2011 Syracuse Area Music Award (SAMMY) in the category Best Recording, Other Styles, for its second and most recent album “Native Orange.” The SAMMYs celebrate the Syracuse music scene and inspire innovation and creativity. 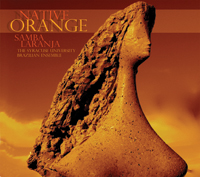 Elisa Macedo Dekaney and Joshua Dekaney, faculty members in the Rose, Jules R. and Stanford S. Setnor School of Music in SU’s College of Visual and Performing Arts (VPA), lead Samba Laranja and served as executive producers of “Native Orange.” They worked with a team of faculty and students from the Setnor School to create the album, which was recorded between May 2010 and January 2011 at SU’s Belfer Audio Laboratory and Archive in E.S. Bird Library and the Rose and Jules R. Setnor Auditorium in Crouse College.

“Elisa and I are thrilled to accept this SAMMY Award on behalf of Samba Laranja,” says Joshua Dekaney. “It truly was a collective effort of faculty and students, and the album showcases just some of the immense talent in the Setnor School of Music.”

Formed in 2001 and based in the Setnor School of Music, Samba Laranja consists of undergraduate and graduate students from a wide variety of studies at SU. Approximately half of the students major in music education, music industry and/or music performance in the Setnor School. As a working band, Samba Laranja performs in smaller versions as a trio, quartet and quintet. These versions of the group perform in more intimate settings, such as private functions, conferences and galleries. “Samba Laranja” means “orange samba”; the ensemble is named after the color of SU.

“Native Orange” may be purchased online at http://www.cdbaby.com/Artist/SambaLaranjaTheSyracuseUnivers or on the SU campus in the Setnor School’s Bandier Program office, Room 207 Crouse College. For more information about Samba Laranja, contact Joshua Dekaney at jadekane@syr.edu or Elisa Dekaney at emdekane@syr.edu or visit http://www.joshdekaney.com or http://www.myspace.com/sambalaranja.