The Astronaut Scholarship Foundation named Syracuse University junior Ryan Badman a 2011-12 Astronaut Scholar. The $10,000 scholarship is presented to top science and engineering students who exhibit exceptional performance, initiative and creativity in their field, as well as intellectual daring and a genuine desire to positively change the world. Badman, a math and physics major in SU’s College of Arts and Sciences, is among 26 students nationwide to receive the prestigious award. 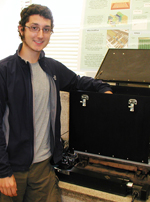 Badman is a Renée Crown University Honors student and a Coronat Scholar, the highest award presented in The College of Arts and Sciences. He plans to pursue a Ph.D. in high-energy physics. Badman’s curiosity about how “real” physics research is done began during his junior year in high school, when “on a long-shot,” he emailed the college’s Department of Physics to inquire about whether there were any openings in the laboratories for high-school students. “To my surprise, I was offered work in Professor Gianfranco Vidali’s astrophysics lab,” Badman says, which is where he spent the summer of 2008 studying how molecular hydrogen forms on the surface of analogs of dust grains, which are present in interstellar dust clouds. Their work resulted in a 2009 publication in Advances in Space Research, on which Badman was listed as a co-author.

Shortly after arriving at SU in fall 2009, Badman joined Richard Schnee’s research group, which is affiliated with the international Cryogenic Dark Matter Search experiment (CDMS). Schnee helps develop software used to analyze data from the detectors, which are housed in the Soudan Underground Laboratory, north of Duluth, Minn.

Badman discovered his true passion when he began working in the department’s experimental high-energy physics group in spring of 2010. The group is affiliated with the LHCb collaboration at the CERN laboratory near Geneva, Switzerland. The LHCb is one of four particle detectors located in CERN’s Large Hadron Collider ring. Badman’s project was to test electronic chips that will be used in the next-generation particle detectors for the LHCb. The chips are being built by physics Professor Marina Artuso, who received a $540,776 National Science Foundation (NSF) grant to develop new hybrid pixel sensors for a component of the LHCb, called the VELO.

Last summer, Badman solidified his interest in high-energy physics through his participation in an NSF-supported Research Experience for Undergraduates (REU) Program at the Cornell Laboratory for Elementary Particle Physics. As an REU intern, Badman worked on computer simulations of electron cloud buildup in the beam pipe at the Cornell Synchrotron. The simulations were matched to real data to determine parameters for understanding the physics behind electron cloud generation.

This fall, in addition to working on a physics analysis project with Artuso for the experimental high-energy physics group, Badman is pursuing the theoretical side of high-energy physics through an independent study with Professor Simon Catterall, who builds computational models that attempt to explain and go beyond the standard model of particle physics. “High energy physics is not only fascinating, but it also contributes to the development of new technologies that are used in a number of other fields,” Badman says. “By pursuing a Ph.D. in this field, I want to be on the front lines of discovery of revolutionary forms of physics.”