Mario Vargas Llosa, the Peruvian writer who won the 2010 Nobel Prize in Literature, is the subject of a daylong symposium, organized and presented by the Department of Languages, Literatures and Linguistics (LLL) in Syracuse University’s College of Arts and Sciences. 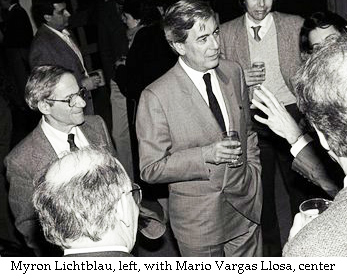 The symposium, “A Writer’s Reality: Mario Vargas Llosa,” will take place on Friday, Oct. 21, from 8:15 a.m.-4 p.m. in the Kilian Room (500) of the Hall of Languages. Free and open to the public, the event honors both the memory of Myron A. Lichtblau, a renowned Latin American scholar and former professor and chair of LLL, and the 65th anniversary of “Symposium: A Quarterly Journal in Modern Literatures” (Routledge), a scholarly publication with which he was closely affiliated. For more information, email Amy Wyngaard, associate professor of LLL, at aswyngaa@syr.edu, or call the LLL department at (315) 443-2175.

“We are proud to present this special symposium, which is both interdisciplinary and international in scope,” says Wyngaard, editor of “Symposium” and a specialist in French literature and culture. “We will bring together an array of scholars working on Vargas Llosa, who is one of the most celebrated writers of the Spanish-speaking world, as well as members of the Lichtblau family.”

The program concludes with a reception from 4-5 p.m. in the Myron A. Lichtblau Memorial Room (311) of Huntington Beard Crouse Hall.

Described by The New York Times as an “anti-totalitarian intellectual whose work covers the range of human experience,” Vargas Llosa has written more than 30 works of nonfiction, plays and novels, including “The Feast of the Goat” (Farrar, Straus & Giroux, 2001) and “The War of the End of the World” (Penguin, 1997). His receipt of the Nobel Prize was a first for a Spanish-language writer in two decades, after Octavio Paz of Mexico won in 1990.

Vargas Llosa has close ties to SU, having served as the Jeanette K. Watson Distinguished Visiting Professor in the spring of 1988. Out of the professorship came “A Writer’s Reality” (SU Press, 1991), written by Vargas Llosa and edited with an introduction by Lichtblau, which Eric wrote about last fall in The New York Times: “As successful as the lectures [at SU] were, Vargas Llosa never thought of them as anything more than that. ‘I had no idea when I came here to deliver these lectures that this could become a book,’ he acknowledged to a local newspaper reporter. ‘It was Myron Lichtblau’s idea.’ From that idea, Vargas Llosa said, was born ‘a kind of accidental, literary autobiography.’ … And so, with Vargas Llosa’s blessing, my father labored over his tape player until late in the evenings to listen to the novelist’s lectures and get them down on paper.”

“Displaying both modernist and postmodernist characteristics, Vargas Llosa’s works are best known for their social and political critiques,” explains Bulman, adding that he ran for president of Peru in 1990. “His accounts, based on both personal experiences and historical events, explore themes of dictatorship, corruption, oppression, abuse, exploitation and the struggle for freedom.”

“A Writer’s Reality” is sponsored by LLL in conjunction with SU’s Centro de Estudios Hispanicos and Program on Latin America and the Caribbean.