Grace La and James Dallman, Syracuse Architecture fall 2011 visiting critics and founding principals of Milwaukee architectural design firm LA DALLMAN, will lecture at the Syracuse University School of Architecture on Tuesday, Oct. 18, at 5 p.m. in Slocum Hall Auditorium. Their lecture, “Resonance,” is free and open to the public.
LA DALLMAN is a design practice engaged in the transformation of site and infrastructure through spatial and material investigations, with built work ranging from bridges to houses, and science exhibits to civic landscapes. 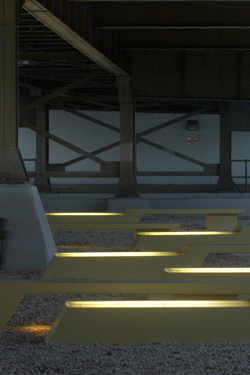 The firm has been awarded several honors for its built work. LA DALLMAN was named a “2010 Emerging Voice” by the Architectural League of New York and was the first U.S. recipient of the international Rice Design Alliance Prize, recognizing “exceptionally gifted architects in the early phase of their career.” The firm has won six Design Awards for Excellence from the American Institute of Architects Wisconsin. Prizes for its entries in prestigious design competitions include Pittsburgh’s 2006 International West End Pedestrian Bridge, Atlanta’s 2005 International Andrew Young Park, Milwaukee’s Kilbourn Tower and Pittsburgh’s 2007 Allegheny Square.

La and Dallman have lectured extensively and their design and research is widely published. Their work has been exhibited in various cities and universities, including at the Carnegie Museum of Art, the New Museum and the Museum of Fine Arts Houston. They’ve taught design studios at the University of Wisconsin-Milwaukee, and their alma mater, Harvard University’s Graduate School of Design.

This lecture is supported in part by the Joseph D. Patton, III Memorial Endowment for Visiting Critics.