As part of Syracuse University’s disability-themed Shared First Year Experience, the documentary film “Wretches & Jabberers: And Stories from the Road” will be shown on Monday, Sept. 19, at 7 p.m. in the Goldstein Auditorium of Schine Student Center. The event is free and open to the public, and the film will be shown in open-captioned format. Tickets are not required. 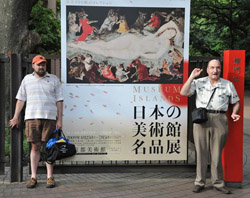 Directed and produced by Academy Award winner Gerardine Wurzburg, “Wretches & Jabberers” was co-produced by School of Education Dean Douglas Biklen. Following the screening, Biklen will moderate a panel discussion and audience Q & A. Panelists include stars of the film Larry Bissonnette, Tracy Thresher, Pascal Cheng and Harvey Lavoy. ASL interpretation will be provided for the panel discussion.

“Wretches & Jabberers” is a poignant narrative that follows two men with autism, Thresher and Bissonnette, who embark on a global quest to change attitudes about disability, intelligence and communication. A story about personal struggle that rings with intelligence, humor, hope and purpose, this film is about the life-sustaining power of relationships-–the personal connections that people make through communication.

“Wretches & Jabberers” is the latest documentary by Wurzburg, who won the 1993 Academy Award for Best Documentary Short Subject for her film “Educating Peter,” for which Biklen served as educational consultant. She was again nominated in 2005 for “Autism is a World,” which was also produced with Biklen. Wurzburg received an honorary degree from SU in 2011.

The University’s Shared First-Year Experience program is a series of themed cultural events to serve as a touchstone for students from all backgrounds, as well as for the array of academic disciplines and intellectual traditions represented across the University. The theme for the 2011-12 year is “Disability.” Though the events are meant to build connections for first-year students, all members of the University community are invited to attend.

Porcini, portobello and cremini … you’ve probably heard of these types of mushrooms, but how about mycelium? Literally translated as “more than one,” mycelium is the vegetative part of a fungus consisting of a network of interwoven thin, white filaments….

Growing up in Calcutta (now Kolkata) in eastern India, Romita Ray developed a deep appreciation for the iconic Victoria Memorial Hall (VMH) and its exquisite collection of art and 64 acres of gardens. The urban landmark is the most visited…

A new exhibition at Syracuse University’s Sue and Leon Genet Gallery at the School of Design features distinctive garments that reflect an avid study of ancient and ethnic cultures. “Mary McFadden: American Fashion Designer” showcases the work of a “design…