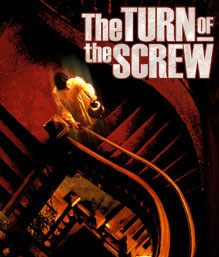 The 39th season at Syracuse Stage opens Sept. 21 with the classic Henry James psychological thriller “The Turn of the Screw,” a riveting story of a young governess and two small children set on a remote English estate. In this wildly entertaining stage adaptation by Jeffrey Hatcher, two actors, led by Director Michael Barakiva (director of last season’s “The Clean House”) bring all of James’ eccentric characters and spine-tingling moments to life. Curzon Dobell, last seen at Syracuse Stage as Dr. Sweet in “Bug” (2005), will portray several characters as The Man. Actress Kristen Sieh, a founding member of the award-winning New York-based theater company The TEAM, will perform the role of The Governess.

Tickets range $18-$50 and are available at the Syracuse Stage Box Office, 315-443-3275 or http://www.SyracuseStage.org. “The Turn of the Screw” is sponsored by Alliance Bank and Residence Inn. Media sponsors are the CNY Business Journal, WAER and WCNY. Stage’s 2011-12 season sponsor is The Post-Standard. One hour before every performance (except the Wednesday matinee) a cast member will offer an insightful and entertaining talk about the play.

As the first production staged in the newly reconfigured Storch Theatre, “The Turn of the Screw” offers Syracuse Stage patrons the experience of three-quarter arena seating. The performance area will be surrounded by 269 seats on three sides. For future productions, the seating configuration will be flexible, allowing the space to be used in its original 200-seat endstage configuration as needed. The Storch Theatre is located in the same building as the Archbold Theatre, where most Syracuse Stage productions take place. The entrance is located on Irving Avenue, under the blue awning, half a block from Syracuse Stage’s main entrance.

“Three-quarter arena seating is ideal for this interpretation of “The Turn of the Screw” because it eliminates the fourth wall, creating a dynamic between audience and performers that is intimate and thrilling. The heightened sense of language, imagination and terror suits this interpretation,” says Producing Artistic Director Timothy Bond.

Set in 1872 at a remote English estate, “The Turn of the Screw” never answers the question: Are the ghosts real, or are they the products of the Governess’ repressed imagination? In his program notes, adaptor Jeffrey Hatcher states that preserving this ambiguity was part of his intent.

“The play is about fear and how fear seduces us,” says Barakiva. “The audience’s imagination is like a character in the play, which pushes us to investigate what we imagine and that which is unimaginable.”

Originally published in 1898 as a novella by Henry James, “The Turn of the Screw” was developed into a stage adaptation titled “The Innocents” in 1950, which led to a 1954 opera by Benjamin Britten and a 1961 movie starring Deborah Kerr as The Governess. A 1959 television play version featured Ingrid Bergman. One of the best and most famous stories in the psychological horror genre, “Turn” has inspired countless works including the feature film “The Others” starring Nicole Kidman.

The premier lobby exhibit by the Onondaga Historical Association for Syracuse Stage’s 2011-12 season will explore the little known connections that James had with Syracuse. While some of Stage’s patrons may recall that the city’s own James Street is named after his grandfather, most don’t know why. The exhibit will explain how that came to be and how much influence James’ grandfather, William James, had over the early development of Syracuse. The exhibition will also tell the story of James’ only known visit to Syracuse, and how his family continued to benefit from Syracuse-related income into the 1960s. And the final exhibit panel will offer a tantalizing glimpse into why Henry James referred to Syracuse’s James Street as “one of the handsomest American streets I have ever seen.”