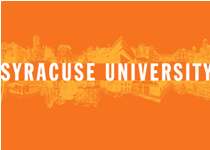 Elizabeth Percival, designer in Syracuse University’s Office of Publications, has won a 2011 American Graphic Design award from Graphic Design USA for an admissions postcard she designed. This is the second year in a row in which Percival has been involved in a winning design (last year she won for “SU Viewbook”).

The Office of Publications is a division of Public Affairs.