Artist Sarah Oppenheimer, known for challenging one’s perceptions of physical space within existing structures, will speak at the Syracuse University School of Architecture on Thursday, Sept. 15, at 5 p.m. in Slocum Hall Auditorium. The lecture, co-sponsored by SU’s  College of Visual and Performing Arts, will focus on her recent work. It is free and open to the public. 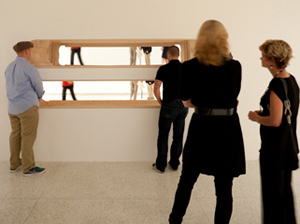 “Oppenheimer’s work typically uses architectural interventions to examine how we perceive space. Her installations often create disorienting or puzzling illusions that lead the viewer to question what s/he thought they knew about their position or orientation within a building,” says Tyler Green, art critic for ARTINFO.

Recent projects include an installation at Baltimore Museum of Art—her first permanent commission at a major American museum; “MF-142” at Annely Juda, London; “VP-41” at Art Unlimited, Basel; and “Automatic Cities” at the Museum of Contemporary Art, San Diego.

To learn more about her work, visit sarahoppenheimer.com.