The Division of Student Affairs has announced the four winners of the OrangeReport summer contest: 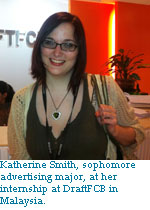 Winners will receive the following opportunity at the University Lecture Series of their choice (excluding the David Sedaris lecture):

OrangeReport was launched in July to invite students to share with the campus community and beyond–through the social, digital media of blog and video–how they were applying their SU experiences to their summer assignments. Its mission is to empower SU students to be their own “news reporter” by creatively telling Scholarship in Action stories through multimedia platforms.

Students stationed all over the globe reported in real-time on their summer activities, from volunteer positions in Israel and Mozambique, to internships in Asia; Massachusetts;  Washington, D.C.; Syracuse and more.

Seventeen students participated as OrangeReporters and a total of 30 reports were submitted. The OrangeReport website received nearly 7,000 page views and more than 650 votes.

For more information on OrangeReport, contact Jill Ouikahilo, communications director for the Division of Student Affairs, at jcouikah@syr.edu or 443-8568.