Members of the Syracuse University and Central New York communities will have an opportunity to view award-winning films from around the world during “Illuminating Oppression: 9th Annual Human Rights Film Festival,” Thursday, Sept. 15, through Saturday, Sept. 17. This three-day festival is part of Syracuse Symposium 2011: Identity, and is presented by the SU Humanities Center and the S.I. Newhouse School of Public Communications. 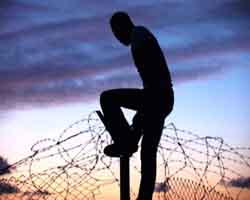 All of the films will be shown in Syracuse University’s Life Sciences Complex Auditorium and are free and open to the public. Public parking will be available for $4 on Thursday, Sept.15, at Booth Garage (Comstock Avenue); on Friday morning, Sept. 16, at University Avenue Garage; on Friday evening and all day Saturday at Q4 (College Place).

Tula Goenka, associate professor of television-radio-film in the Newhouse School and co-director of the festival, says, “Be they fiction or non-fiction, the films that most resonate with viewers have always centered on human conflict, especially the struggle of the human spirit to survive against great odds. These are the stories that we choose to screen at Illuminating Oppression.”

“The events of the past year have continued to demonstrate the crucial role the camera plays in human rights activism around the world,” says Roger Hallas, associate professor of English in The College of Arts and Sciences and co-director of the festival. “It is very heartening to witness the growth of human rights film festivals around the world, including our own, for it proves that there is a substantial audience out there for informative, provocative and engaged filmmaking. Films can make a difference.”

The festival will open on Thursday, Sept. 15, at 7 p.m. with a screening of “Budrus” (Julia Bacha, USA, 2009), a powerful documentary that follows Ayed Morrar, a Palestinian community organizer, as he unites local Fatah and Hamas members along with Israeli supporters in an inspiring nonviolent movement to save his village of Budrus in the West Bank from destruction by Israel’s Separation Barrier. Hailed by Nicholas Kristof of the New York Times as a “must-see documentary,” “Budrus” illuminates the promising strategies of a progressive and inclusive movement for non-violent change in the region. Winner of numerous awards at major film festivals in Jerusalem, San Francisco, Berlin and New York, “Budrus” will be introduced by Nadav Greenberg, outreach and programming coordinator at Just Vision, the organization that produced the film. Greenberg will also lead a discussion after the screening.

Following a highly successful inauguration at last year’s festival, the Digital Witness Symposium returns this year with a focus on the power of the archive for digital human rights media, highlighting projects related to African American history, AIDS activism and the Holocaust. Speakers will include Sam Pollard (filmmaker, editor and professor at the Tisch School of the Arts, New York University); Jim Hubbard (filmmaker and co-founder of the ACT UP Oral History Project); Samuel Gruber (lecturer, Judaic Studies Program, SU); and Lydia Wasylenko (librarian, SU Library). The symposium will be held at 10 a.m., Friday, Sept. 16, in the Joyce Hergenhan Auditorium, Newhouse 3.

On Friday evening, the festival presents “We Were Here,” David Weisman’s reflective and deeply moving portrait of San Francisco’s gay community during the early years of the AIDS epidemic. Through the perspectives of five men and women who survived this unimaginable crisis, the film reveals how San Francisco’s compassionate, multifaceted and creative response to AIDS remains today a powerful standard to aspire to in seeking a healthier, more just and more humane society. The screening will be followed by a panel discussion with Hallas and local AIDS activists Michael Salvo and Nick Orth (Friends of Dorothy Catholic Worker House).

Major co-sponsors of the festival are the Central New York Humanities Corridor, an Andrew W. Mellon initiative; the Syracuse University Library; the Program for the Advancement of Research on Conflict and Collaboration (PARCC); the South Asia Center at the Daniel Patrick Moynihan Institute for Global Affairs; the Office of Multicultural Affairs; the Alexia Foundation; and SASSE: Students Advocating Sexual Safety and Empowerment.

Daily themes and the films to be screened during the festival include:

WITNESSES TO THE EPIDEMIC
Friday, Sept.16, 7 p.m.
“We Were Here”
David Weissman (90 mins., USA, 2011)
This screening is co-sponsored by the LGBT Resource Center and the LGBT Studies Program.

THE SITE OF MEMORY
Saturday, Sept. 17, 4 p.m.
“Nostalgia for the Light”
Patricio Guzmán (90 mins., France/Chile/Germany, 2010)
In his hauntingly beautiful odyssey across Chile’s Atacama Desert, Guzmán explores an aching paradox: the burial site for many disappeared victims of Pinochet’s regime is also the best place on earth for astronomers to view the heavens. This screening is co-sponsored by the Latino-Latin American Studies Program.