The 2011-12 season of Syracuse University’s Pulse Performing Arts Series features an exciting selection of ticketed performances. This year’s lineup includes an evening with the esteemed humor writer David Sedaris; a concert featuring the unique sounds of a capella group The Backbeats; a performance by the first professional step company, Step Afrika!; and a pop/rock concert with original “RENT” co-stars Adam Pascal and Anthony Rapp. All performances will take place in the Goldstein Auditorium of the Hildegarde and J. Myer Schine Student Center on the SU campus.

Pulse, presented by SU’s Division of Student Affairs, provides SU undergraduates and, in turn, the Central New York community, with out-of-classroom opportunities to attend and participate in programs, performances, exhibitions and events in the performing and visual arts.

David Sedaris, in cooperation with the University Lectures Series, Oct. 11 at 6 p.m.

Free tickets will be required for this lecture at a maximum of two per person and will be available at the Schine Box Office in early fall. Ticketholders must be seated by 5:30 p.m.; after that time, tickets will be invalid and seating will be opened to the general public. 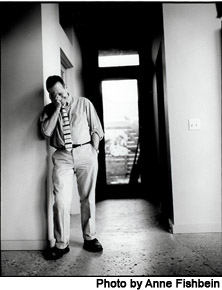 David Sedaris is one of America’s pre-eminent humor writers. The great skill with which he slices through cultural euphemisms and political correctness proves that Sedaris is a master of satire and one of the most observant writers addressing the human condition today. Sedaris is the author “Barrel Fever” (1995) and “Holidays on Ice” (2010), as well as collections of personal essays, “Naked” (1998), “Me Talk Pretty One Day” (2001), “Dress Your Family in Corduroy and Denim” (2005) and “When You Are Engulfed in Flames” (2009), each of which became a bestseller. Sedaris’ pieces appear regularly in The New Yorker and have twice been included in “The Best American Essays.” His newest book, a collection of fables titled “Squirrel Seeks Chipmunk: A Modest Bestiary” (with illustrations by Ian Falconer), was published in September 2010. He and his sister, Amy Sedaris, have collaborated under the name “The Talent Family” and have written half a dozen plays.

Step Afrika! is the first professional company in the world dedicated to the tradition of stepping. Founded in December 1994, the company is critically acclaimed for its efforts to promote an understanding of and appreciation for stepping, and the dance tradition’s use as an educational tool for young people worldwide. Step Afrika! reaches tens of thousands of Americans each year and has performed on many stages in North and South America, Europe, Africa and the Caribbean.

Based in Washington, D.C., the company has been featured on CNN, BET, PBS and NPR, as well as in numerous books, documentaries and articles that seek to explore the tradition of stepping. Step Afrika! serves as a cultural ambassador for the United States, representing the nation at events around the world through special invitations from American embassies. Its signature event, the annual Step Afrika! International Cultural Festival in Johannesburg, South Africa, is the fruit of a 10-year collaboration with the Soweto Dance Theatre that unites artists from around the world in dialogue and dance performance.

Step Afrika! is completing an annual 50-city tour of American colleges and universities from Maine to Mississippi. The company is a model for the use of stepping in educational settings, espousing themes such as teamwork, academic achievement and cross-cultural understanding. Step Afrika! frequently conducts residencies, master classes and in-school performances for the John F. Kennedy Center for the Performing Arts, the Washington Performing Arts Society and the Smithsonian Institution, and in schools and community-based organizations around the world.

As a not-for-profit organization, Step Afrika! has received support from the D.C. Commission on Arts & Humanities, the National Endowment for the Arts, the Morris & Gwendolyn Cafritz Foundation, the Eugene and Agnes E. Meyer Foundation, the National Center for Neighborhood Enterprise and many other generous donors.

The Backbeats are one of the newest groups to hit the a cappella scene since placing third on Season Two of NBC’s “The Sing-Off.” Assembled from members of competing collegiate ensembles, these twenty-somethings from around the country are quickly developing a new sound.

With diverse experience in songwriting, musical theater, business and film, each performer brings his or her own talent and fresh perspective to this super-group. Their unique voices blend together to create a stirring, rich and soulful sound that is undeniably their own.

The Backbeats deliver commanding lead vocals, luscious harmonies and electrifying vocal percussion, but their true strength lies in their commitment to sincere and passionate performance. It is this commitment that has led each member to join together for a group that is far greater than the sum of its parts.

For the first time, original “RENT” co-stars Adam Pascal and Anthony Rapp come together in a special concert evening through rj productions. 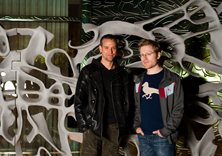 These two Broadway veterans return to the concert stage in a pop/rock evening celebrating their individual musical careers as well as the Broadway cultural hit “RENT.” As both friends and co-stars, Pascal and Rapp will share stories about the hit show that brought them together 13 years ago and perform songs from the Pulitzer Prize-winning show, as well as their individual songs and original material audiences have come to know. It’s sure to be a popular concert following on the heels of their two-year national tour of “RENT.”

The cost for individual tickets for events in the Pulse season (with the exception of the David Sedaris lecture, which is free but requires a ticket from the Schine Student Center Box Office) is $5 for students with an SU or SUNY-ESF I.D.; $16 for SU faculty, staff, alumni and Pulse Partners; and $20 for the general public.

All tickets can be purchased at the Schine Box Office or online at http://students.syr.edu/boxoffice/ with an additional $1.25 processing fee. For more information, call the box office at (315) 443-4517.

Pulse discount passes are also available until Oct. 3. The three pass levels are: General Admission, SU Faculty/Staff/Alumni and SU Student. Passes can be purchased at the Schine Box Office, 315-443-4517.

SU Faculty/Staff/Alumni Pass: $48
• One ticket to Step Afrika!, The Backbeats, and Adam and Anthony LIVE • VIP seating • Invitation to post-performance receptions • Choice of one ticket to Pulse Partner event (SU Drama, Syracuse Stage or Syracuse Opera; subject to availability at time of purchase). Please refer to the list of Pulse Partner Ticket Offers found at http://pulse.syr.edu.

SU Student Pass: $15
• One ticket to Step Afrika!, The Backbeats, and Adam and Anthony LIVE • VIP seating • Invitation to post-performance receptions • Choice of one ticket to Pulse Partner event (SU Drama, Syracuse Stage or Syracuse Opera; subject to availability at time of purchase). Please refer to the list of Pulse Partner Ticket Offers found at http://pulse.syr.edu

Pulse is a model program, recognized for quality, diversity, innovation and collaboration, while it celebrates and expands the cultural climate of Syracuse University. The series seeks to raise the caliber of cultural programming while increasing the number of participating students. Pulse programs the best offerings of local arts organizations with performances of internationally renowned visiting artists.

For more information on Pulse, visit pulse.syr.edu. Become a fan on Facebook at “Pulse Performing Arts Series at Syracuse University.”