Amira Zahid and the trustees of the Dahesh Museum of Art, along with Syracuse University Chancellor Nancy Cantor have announced the expansion of their arts partnership to include a month-long exhibition, “Reconnecting East and West: Islamic Ornament in 19th-Century Works from the Dahesh Museum of Art and Syracuse University.” It opens to the public at the Dubai Community Theatre and Arts Centre (DUCTAC), Mall of the Emirates, on June 18 and remains on view until July 18. The exhibition celebrates the 19th-century rediscovery of authentic Islamic ornament and design by Western scholars and artists. 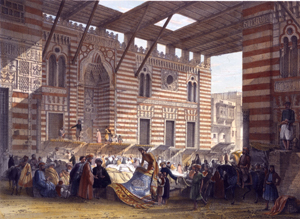 “Reconnecting East and West” is the Dahesh Museum of Art’s latest exhibition in partnership with Syracuse University Art Galleries and the first to be presented in the United Arab Emirates. Curated by Alia Nour, Dahesh Museum of Art associate curator, with J. David Farmer, director of exhibitions, and designed by Andrew J. Saluti, assistant director, SU Art Galleries, “Reconnecting East and West” is a model of successful institutional collaboration.

Using English and Arabic text panels, “Reconnecting East and West” traces the remarkably rich documentation of Islamic ornament and design by European scholars, artists and architects who traveled to the Middle East in the 19th century. The 45 works on view reveal the diversity of Islamic ornamental vocabulary and its application to a wide variety of buildings, books, textiles and objects. Featured in the exhibition are a selection of spectacular color lithographs from Émile Prisse d’Avenne’s magisterial Islamic Art in Cairo, along with three original volumes that make up this compendium; individual plates from Owen Jones’ influential “Grammar of Ornament” and “Alhambra” are also shown alongside the original publications. In addition, there are paintings by Orientalist artists Rudolf Ernst, Ludwig Deutsch and Federico Ballesio, and prints after Jean-Léon Gérôme that reflect the ubiquity of these motifs in Orientalist art.

While these texts and images became a primary source of information for Western painters, architects and decorators, they became—and remain—valuable records of many Islamic monuments and their decoration, some of which have disappeared over time. Reconnecting East and West closes with contemporary photographs of Dubai, a modern Islamic city, juxtaposed with the earlier, historical material to illustrate the continuity of traditional Islamic ornament in today’s ultramodern cityscape.

To stimulate further conversations about the intersection of history, art and the complex relationship between cultures over time, “Reconnecting East and West” is accompanied by a full-color booklet, in English and Arabic, with text and images from the exhibition, along with a list of suggested readings and a glossary of terms.
The Dahesh Museum of Art and SU formed a cultural partnership in 2008 to present art exhibitions drawn from the museum’s collection in New York City at SU’s Palitz Gallery/Lubin House, as well as on the Syracuse campus. As arts partners with a similar educational mission, each is committed to share resources, develop new audiences and deepen global conversations about art.

The expansion of their arts partnership to the Persian Gulf has been a natural evolution for the museum and University. Each partner has professional, institutional, scholarly and personal ties to the region; each is well-known and respected for its commitment to contributing to the important East/West dialogue.

According to Amira Zahid, one of the Dahesh Museum’s founding trustees, “The Dahesh Museum of Art is proud to share its collection with audiences in Dubai for many reasons. First, and foremost, we have expertise in the field through the scholarly exhibitions we have produced over the years. Second, Dr. Dahesh, who assembled the original collection, was a resident of Beirut and understood the value of collecting 19th-century Orientalist art for future generations in the East, as well as the West.

“On a more personal level, I have deep roots in the region. I am of Saudi origin, with Turkish ancestry, was born in Egypt, lived for many years in Lebanon and then moved to the United States, escaping that civil war to attend college. My family, friends and colleagues commute, literally and figuratively, between East and West. In bringing our work to Dubai, I am convinced that audiences—young and old—will treasure these visual records and the impact they have had worldwide.”

For SU Chancellor Nancy Cantor, this exhibition reflects broadening scholarly interest across the University in the Middle East and Arab Gulf. “Our reciprocal partnership with the Dahesh Museum—and this exhibit, in particular—facilitates our faculty’s and students’ intensifying engagement with this region and its diverse cultures. SU’s growing and deepening presence here is sparking creativity and innovation from the arts and humanities, to the social sciences and journalism, to the sciences and engineering. None of this would be possible without our many prominent alumni in the region, who are tremendously supportive of our cross-cultural collaborations and are using their expertise and resources to create vital learning opportunities for our students.”

The exhibition’s opening coincides with the launch of SU’s expanded educational and cultural initiatives in the Gulf region. On June 17, SU opens an office in Dubai and announces new internship opportunities provided by SU alumni in the region. To celebrate these events, representatives of the Dahesh Museum of Art will be traveling to Dubai, where Chancellor Cantor and trustees of Syracuse University will join them. Together they will host a special reception on June 17, at which Mohammed Al Murr, deputy chairman of the Dubai Culture and Arts Authority, and a 1978 SU alumnus of The College of Arts and Sciences, will be an honored guest.

The Dahesh Museum of Art, the only institution in America devoted exclusively to collecting and exhibiting 19th- and early 20th-century academic art, has an extensive collection of art in all media from the 1800s depicting the Middle East, North Africa and Turkey (then referred to collectively as the Orient). The museum has organized a number of exhibitions—with publications—that explore the East/West dynamic: “Picturing the Middle East: A Hundred Years of European Orientalism” (1996); “A Distant Muse” (2000); “Staging the Orient: Visions of the East at La Scala and the Metropolitan Opera” (2004); “Napoleon on the Nile: Soldiers, Artists, and the Rediscovery of Egypt” (2006), which also traveled to the SU campus (2009), among several other university and museum venues; and “In Pursuit of the Exotic: Artists Abroad in 19th-Century Egypt and the Holy Land” (2009), presented in New York City at Palitz Gallery/Lubin House.