The LGBT Resource Center at Syracuse University has announced the recipients of its 2011 Foundation Awards, who were honored at the Rainbow Banquet on April 28. This year’s recipients join a prestigious group of students, alumni, faculty, staff and community adult and youth partners whose leadership and commitments have made SU and the Syracuse Community a better place for all. 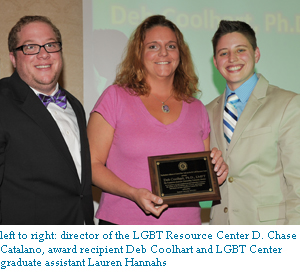 The Foundation Awards were established in 2003 to recognize individuals, regardless of their sexual orientation or gender identity, whose personal or professional lives have positively affected the LGBT community in a significant way.

Outstanding Adult Community Member: Deb Coolhart, who was recognized for her personal and professional commitment to the field of Marriage and Family Therapy, and specifically for her role in establishing the transgender services clinic at the Goldberg Center.

Outstanding Youth Community Member: J.J. Davis, a senior at Jamesville-DeWitt High School, who is a dedicated LGBTQ ally reviving the Acceptance Coalition Club at her school, and has worked this year through the QuERI theater program to bring the experiences of harassment that LGBTQ students face every day to the stage. She hopes to increase understanding and encourage change through her advocacy.

Outstanding Community Organization: SAGE Upstate, an organization that has been serving LGBT Central New Yorkers as they age for more than 10 years, with a reach to seven counties in the Central New York area. Sage Upstate is a strong and consistent advocate for LGBT rights on both the community and state level.

Outstanding Faculty Award: Alejandro Garcia, faculty in the College of Human Ecology, who has been a strong advocate in regard to LGBT issues on campus, in the community and on the national scale as well. In the School of Social Work, he has promoted a perspective that diversity, including LGBT issues, need to be addressed throughout the curriculum at both the undergraduate and graduate levels.

Outstanding Staff Member Award: Jeffrey Carroll, residence director for Boland Hall, who has provided unwavering support to the students and the mission of the LGBT Resource Center for the past four years. He co-facilitates New to ‘Cuse, co-advises Spectrum and works with LGBT groups both locally and nationally.

Outstanding Alumni Award: H. Daniel Smith, professor emeritus of religion, who taught at SU for 35 years, from 1958-1993. Smith is an impressive role model and advocate for LGBT communities and people, both within and outside of the campus. He was one of the first professors on this campus to come out publicly in his classes, and offer support to both heterosexual and queer students.

Outstanding Undergraduate Student Award: Danielle S. Sutton, who as an undergraduate student has held multiple leadership roles within the LGBT community. Not only is Sutton the current president of Pride Union, but she previously held a position of student staff assistant at the LGBT Resource Center and has been an active leader within the Office of Residence Life and with Spectrum, a group of RAs working to improve the campus climate for LGBTQ students within the campus residence halls.