The Syracuse University School of Education‘s next installment in its Landscape of Urban Education lecture series will be a screening and discussion of “Waiting for Superman,” the powerful 2010 documentary about urban education reform. 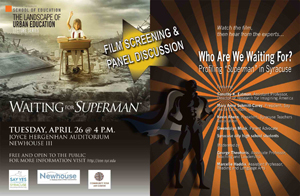 “Who Are We Waiting For?: Profiling ‘Superman’ in Syracuse” begins at 4 p.m., April 26 in the Joyce Hergenhan Auditorium in Newhouse 3 with a screening of the documentary. It will be followed by a panel discussion that includes local educators and education experts, as well as Syracuse high school students. The event is free and open to the public. Parking will be available in the University Avenue Garage.

Filmmaker Davis Guggenheim’s “Waiting for Superman” follows a handful of promising students from across the nation as it examines public education in America. The film looks at the myriad problems facing urban students, including schools called “drop-out factories”—schools with low graduation rates that do not necessarily encourage academic success. The film includes commentary from top education reformers, including former Washington, D.C. Schools Chancellor Michelle Rhee and Geoffrey Canada, founder of the Harlem Children’s Zone in New York City.

Discussion panelists will include Timothy Eatman, assistant professor and director of research for Imagining America; Mary Anne Schmitt-Carey, president of Say Yes to Education; Gwendolyn Muok, parent advocate; and high school students from the Syracuse City School District. The panel will be moderated by George Theoharis, associate professor of teaching and leadership, and Marcelle Haddix, assistant professor of reading and language arts.

The Syracuse City School District is in the midst of demonstrating reform by piloting the nation’s first district-wide implementation of Say Yes to Education, an initiative that provides academic and social support for students and free tuition to graduates at participating colleges and universities.

This event is co-sponsored by Syracuse Say Yes to Education, S.I. Newhouse School of Public Communications and the Community Folk Art Center.