The Syracuse University Wind Ensemble will present a concert Wednesday, April 27, at 8 p.m. in the Rose and Jules R. Setnor Auditorium, Crouse College. The concert is free and open to the public. Free parking is available in the Irving Garage. 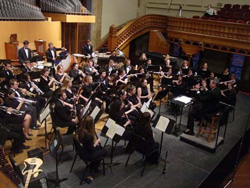 The Wind Ensemble performs under the direction of John M. Laverty, director of bands at SU and a faculty member in the Rose, Jules R. and Stanford S. Setnor School of Music in SU’s College of Visual and Performing Arts. The ensemble will perform works by Bach, Lorenz, Mackey and Nelson, as well as a world premiere by Chris Cresswell, a senior composition major in the Setnor School.

The Wind Ensemble is SU’s premiere concert band and is primarily made up of musicians from within the Setnor School. The ensemble members will dedicate this concert to the musicians of the Syracuse Symphony Orchestra, who are their colleagues, friends and teachers.