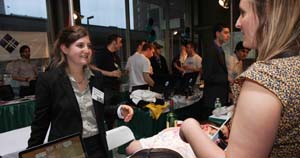 Student companies pitched to panels of judges composed of alumni, entrepreneurs and faculty at The Tech Garden. The selected companies range from products that allow devices to be wirelessly controlled to a variety of mobile apps to the renovation of old store fronts. The companies include an interdisciplinary mix of student talent representing a diverse range of majors, including civil engineering, media management, finance, computer science, information management, advertising, real estate, psychology, accounting and architecture.

“The judges were impressed again this year with the quality of business ideas, talent and excitement in our student entrepreneurs,” says Syracuse University Associate Provost for Entrepreneurship and Innovation Bruce Kingma. “The Ray von Dran IDEA Awards will allow student companies to take their idea or business to the next level and do it right here in Central New York. We’re keeping the incredible talent that we have at SU in Syracuse.”

Funding is awarded to student companies to cover startup expenses incurred in the summer, typically while student teams are working at the Tech Garden in downtown Syracuse. Student expenses may include salaries of company owners and employees, space rental, marketing, legal, website and proof-of-concept development.

The winning companies are:

Winning teams will be required to meet with SU Entrepreneur-in-Residence John Liddy to outline the deliverables, company calendar and business plan, after which they will receive the first half of their funds. They earn the remaining half of the Ray von Dran IDEA Award in six to 12 weeks, based on their work in implementing the plans discussed with Liddy.

“The Ray von Dran IDEA Award gives us the incredible opportunity to get program development and testing for our first mobile app done within the next few months, and get it out in the world to help people sooner,” says Ramcharran, Lujo co-founder. “Our team’s goal is to help people improve their health, and pitching and talking to potential customers at Emerging Talk and receiving enormously positive feedback made us realize the magnitude of our work.”

The Ray von Dran IDEA Award recipients were recognized during Emerging Talk, an event that pulled together more than 130 student entrepreneurs from universities and colleges across Central New York, as well as business members and others interested in entrepreneurship. Thirty five student companies took part in the student venture showcase, where they had the opportunity to talk about their venture with investors, faculty, students and community members.

The Ray von Dran IDEA Awards are supported by the IDEA Fund, established and endowed by Gisela von Dran, as well as alumni, donors, SU Chancellor Nancy Cantor and the Kauffman Foundation via Enitiative, a collaborative partnership that provides contacts, resources and funding support for entrepreneurial projects, while uniting faculty and students of Central New York academic institutions and members of the community.