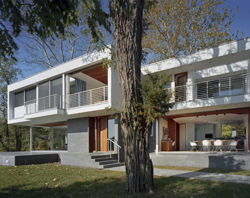 Whiting lectures frequently throughout the United States and abroad. She has published widely in magazines and anthologies and is currently completing a book, “Superblock City: Chicago’s Elastic Grid.” She is also the founding editor of a new architectural book series with Princeton University Press, “POINT: ESSAYS ON ARCHITECTURE”—three short books on contemporary architecture and design issues, written by leading critics, theorists, historians and practitioners.

Whiting co-founded WW Architecture with Ron Witte in 1999. The firm’s design projects include the Golden House in Princeton, N.J.; the Museum of Art + Design at San Jose State University in California; renovations for the drama division at the Juilliard School, New York, and numerous other projects.

Prior to establishing WW, Whiting worked with OMA in the Netherlands, where she was a principal designer for the Euralille master plan. She has also worked with Peter Eisenman in New York and Michael Graves in Princeton.