‘300 Miles to Freedom’ to premiere at Syracuse Stage April 14

Syracuse Stage will be the setting for the April 14 premiere of a new film, “300 Miles to Freedom,” which tells the story of John W. Jones, a fugitive slave who escaped bondage in Leesburg, Va., in 1844 and traveled the Underground Railroad to Elmira, N.Y. He arrived there as a 27-year-old illiterate with $1.46 in his pocket. By his death in 1900, he was a wealthy, literate, respected member of the community. 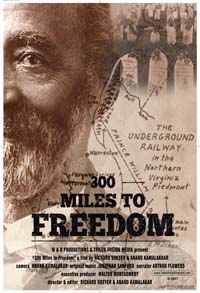 The filmmakers take Jones’ route from Leesburg to Elmira, and tell his story through the voices of those they meet along the way—historians, ferry boat captains, ministers, farmers, restaurant and gas station owners. And they tell the Elmira chapters of the film in the same way—weaving the voices and images of the past with those of the present.

“‘300 Miles to Freedom’ celebrates the courage and tenacity of fugitive slaves like John W. Jones,” says Breyer. “The film also celebrates those who quietly stood up to injustice by helping slaves escape on the Underground Railroad and by fighting for their freedom through the abolitionist movement.”

The original concept for the film came from SU alumnus Walter Montgomery ’67, CEO and partner with Robinson, Lerer and Montgomery LLC, who is a native of Elmira. A member of the advisory board for SU’s Maxwell School of Citizenship and Public Affairs, he served as the film’s executive producer. Arthur Flowers, English professor in SU’s College of Arts & Sciences, performs the voice of John W. Jones.

The event will include a performance by the Syracuse chapter of the Gospel Music Workshop of America, led by Joan Hillsman. A reception will follow the screening; food will be served.

Proceeds from the event will benefit Syracuse’s Southside Community Coalition. Tickets are $10 for general admission and $5 for students, but no one will be turned away for financial reasons. Seating is limited. RSVP by emailing your name to rlbreyer000@gmail.com or calling (315) 449-2443.

The Documentary Film and History Program is a joint master’s degree offered by the Newhouse and Maxwell schools.