Nigel Hall to perform at Funk ‘n’ Waffles with Sophistafunk 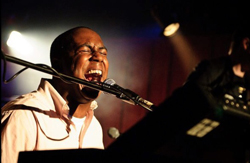 Hall’s appreciation for artists like Herbie Hancock, Donny Hathaway, Roy Ayers and Rick James inspired him learn to play various instruments. His keen ear and unstoppable drive have helped him to become a one-man band, appearing on keyboards, bass, drums and even vocals. His skillful sounds have been featured in venues across the country.

In addition to working with his band, Chapter 2, Hall has had the opportunity to collaborate with many notable artists in the jazz and soul scene throughout his musical career. Notable joint works of effort include those with trio Soulive, funk powerhouse Lettuce, and The Derek Trucks & Susan Tedeschi Band. Hall has also delved into the realm of hip-hop with his collaboration with Talib Kweli on the track “Mr. International.”

Most recently, Hall completed a month-long residency at the Rockwood Music Hall in New York City. Starting in May, he will be singing in the Warren Haynes (of Allman Brothers and Gov’t Mule) Band.

Sophistafunk combines the sounds of live funk, soul and dance music with the intensity of hip hop and spoken-word poetry. The band consists of Adam Gold on various keyboards, organ, bass synthesizer and vocals; Jack Brown on vocals; and Emmanuel Washington on drums. They have shared the bill with Soulive, Lettuce, Fergie, Asher Roth, Ra Ra Riot and Sean Kingston, to name a few.