David Liebman, a legendary saxophonist who shot to fame with Miles Davis in the 1970s and was awarded the 2011 NEA Jazz Masters Award, is making a rare Syracuse appearance April 15-16. Liebman’s visit is made possible by the Syracuse University Humanities Center in The College of Arts and Sciences, in conjunction with the CNY Jazz Arts Foundation and SU’s Winnick Hillel Center for Jewish Life, which are celebrating their 15th and 60th anniversaries, respectively. 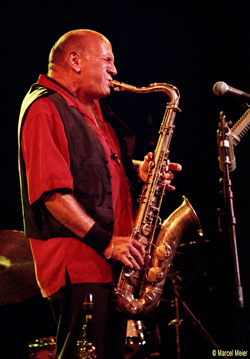 Liebman will participate in a panel discussion on jazz and culture on Friday, April 15, at 3 p.m. in Lender Auditorium of the Winnick Hillel Center for Jewish Life (102 Walnut Place). The event is free and open to the public, and is moderated by Theo Cateforis, assistant professor of art and music histories at SU. Panelists include Liebman; Bret Zvacek, professor of music at the State University of New York at Potsdam and music director of the CNY Jazz Orchestra; Ken Frieden, professor and the B.G. Rudolph Chair in Judaic studies at SU; and Joseph Riposo, director of the Morton B. Schiff Jazz Ensemble and director of jazz studies at SU.

The following day, Liebman will perform with the CNY Jazz Orchestra, directed by Zvacek, at 8 p.m. in Carrier Theater (411 Montgomery St.). The program includes the world premiere of Zvacek’s suite for soloist and jazz orchestra “If a White Horse From Jerusalem,” as well as works by Liebman, Miles Davis, Duke Ellington, Billy Strayhorn and others. Tickets are $19.50-$27.50 and are available by calling the Oncenter Box Office at (315) 435-2121.

“David Liebman is a seminal figure in contemporary music,” says Gregg Lambert, Dean’s Professor of the Humanities and founding director of the SU Humanities Center. “His contributions as a performer, composer, educator and scholar have redefined the possibilities of jazz and world music. His sense of innovation and curiosity is arguably without peer.”

During his visit, Liebman will serve as the Jeanette K. Watson Visiting Collaborator in The SU Humanities Center, in conjunction with The Mellon CNY New York Humanities Corridor (musicology working group). His appointment, says Lambert, grew out of last fall’s Syracuse Symposium, which the SU Humanities Center organized and presented, and the theme of which was “Conflict: Peace and War.”

“David seemed like a natural fit for us because of his interest in Jewish identity, culture and conflict,” says Lambert. “We worked closely with Larry Luttinger [executive director of the CNY Jazz Arts Foundation] and Lowell Lustig [executive director of the Winnick Hillel Center for Jewish Life] to create a two-day program that addresses important humanistic issues, while cutting across multiple disciplines.”

This interdisciplinary approach is underscored by Zvacek’s commission for Liebman and the CNY Jazz Orchestra. Inspired by a poem by Ada Aharoni (an Egyptian-born writer living in Israel), the piece is divided into four movements, and features Liebman performing Jewish and Arabic themes on soprano sax.

“I am struck by the timeliness of the commission, in light of current events in North Africa and the Middle East,” says Luttinger. “Bret has done an amazing job of combining strands of Jewish traditions with Arab and Middle Eastern musics.”

The rest of the program is also international in scope, and features two selections from Duke Ellington’s “Far East Suite;” a jazz tribute to the motion picture “Exodus,” arranged by Quincy Jones; the Miles Davis classic “Eighty-One;” and originals by Liebman and Zvacek.

With a career spanning more than 40 years, Liebman has played with Elvin Jones, Chick Corea, John McLaughlin and McCoy Tyner. It was Liebman’s association with Miles Davis during the 1970s, however, that made him one of the most influential and successful jazz artists of his generation. Liebman’s advanced improvisational style led to numerous albums, books and instructional recordings, many of which are acknowledged as classics. A master of many styles, including classical, jazz and rock, Liebman has composed hundreds of pieces and has led or co-led more than 100 recording sessions. He also founded the International Association of Schools of Jazz.

Liebman is the recipient of numerous honors and awards, including an honorary degree from the Sibelius Academy in Finland, as well as the Order of Arts and Letters from the French government. He has consistently placed among top finalists in the Soprano Saxophone category in the Downbeat Critics Poll since 1973.

For more information about Liebman’s visit, contact the SU Humanities Center at (315) 443-7192, or visit http://syracusehumanities.org.