James Abbott, professor of audio engineering at the Rose, Jules R., and Stanford S. Setnor School of Music in the College of Visual and Performing Arts, has been selected as a fellow at the Burton Blatt Institute (BBI) at Syracuse University. Fellow appointments provide select and accomplished faculty the opportunity to collaborate with BBI on innovative projects related to their disciplines, with impact for people with disabilities. 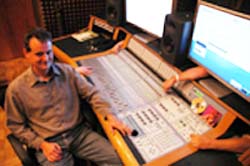 Abbott will work with Peter Blanck, BBI chairman and University Professor, on a music production program that enables people with disabilities to learn and use professional studio equipment. “This interdisciplinary partnership with James Abbott presents an exciting and unique opportunity for the campus and Central New York communities,” says Blanck. “We are thrilled Abbott is collaborating with BBI. His musical expertise and passion for student engagement will be important to the success of the program.”